Sweden’s Julia Engström made a birdie on the final hole to win her first Ladies European Tour title at the Women’s New South Wales Open in Dubbo.

Engstrom nailed a 5-iron from 176 metres to about two feet on the par-3 18th to set up her victory after De Roey missed the green and took a bogey, handing Engström a two stroke victory on 14-under-par. 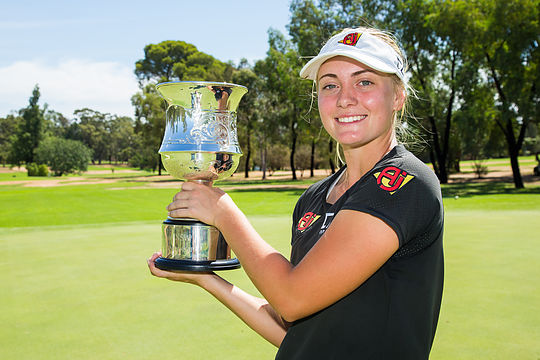 The 18-year-old from Halmstad in southern Sweden began the final round five strokes behind the overnight leader, Manon De Roey, but put up a strong challenge from the outset, eventually drawing level with the leader after the Belgian bogeyed the 17th hole before claiming the victory.

The win is the first for the third year professional, who is still studying for two high school exams in Sweden and balancing her studies with professional golf.

“It’s been a great week and I’m just thrilled,” said Engström, the LET Rookie of the Year in 2017.

“I bogeyed 18 in all three previous rounds and I decided that this time, I was not going to bogey it and I hit a great shot and I didn’t realise how close it was until I heard the reaction from the crowd. It was amazing and a great finish to a great week.”

The victory was timely for Engström as three months earlier she was walking off the 18th green at Vipingo Ridge having seen a seven-shot lead disappear in the final round of the Kenya Ladies Open.

However, the magnitude of the situation proved just too much as she crashed over the closing holes to let her chance at a maiden victory slip away.

De Roey endured a similar fate as she slumped to a final round of 75 which included six bogeys and helped hand victory to her playing partner.

“I don’t think I understand it yet,” Engstrom said immediately after signing her card.

“It’s been a great week, and I’m just thrilled.”

Swede Camilla Lennarth was alone in third at 11-under with India’s Aditi Ashok and Thai teen Atthaya Thitikul sharing fourth at 10-under.

Soo Jin Lee was the leading Australian at 4-under and tied for ninth, while Grace Kim took low amateur honours, finishing in a tie for 21st at 2-over.