Team Europe has retained the Solheim Cup over the USA after a rollercoaster final day singles session in Ohio.

Heading into the Day 3 with twelve singles, Team USA trailed the Europeans by two points, 9-7, and needed a big rally to reclaim the Cup on home soil. The Europeans were able to withstand the USA challenge to win with a 15-13 result for just their second victory on US soil. 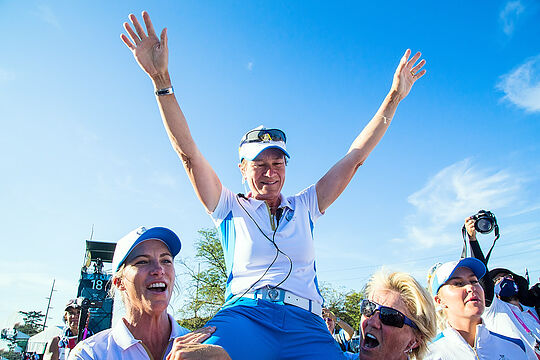 Team Europe needed to win only five of the 12 matches to get the 14 points required overall to retain the cup, which they won in dramatic fashion at Gleneagles in 2019.

Leona Maguire, the first Irishwoman to appear in the Solheim Cup, capped off a brilliant 4-0-1 debut by making three birdies and an eagle on the front nine to top Jennifer Kupcho 5&4 in the third match out and give Europe the first of the five points it needed.

Madelene Sagstrom followed with a 3&2 victory over Ally Ewing and Celine Boutier accounted for USA rookie Mina Harigae 5&4 to push Europe’s total to 12. Anna Nordqvist and Lexi Thompson finished all square in their matches.

Jessica Korda produced a back-nine charge to account for Charley Hull 3&1, while Mel Reid recovered from losing her opening four holes against Yealimi Noh to take the match to the final hole before eventually being beaten 1up.

The turning point came when Matilda Castren defeated Lizette Salas 1-up to give the visitors the decisive point. Castren calmly lagged a 2 metre par putt on the 18th to win the match and give Europe back-to-back Cup victories for just the second time in the 31-year history of the biennial event.

The Europeans have now captured four of their last six meetings with the US.