The Ryder Cup remains one of the most unpredictable and irresistible of sporting events, and the Europeans were the ones exchanging bear hugs and high-5′s as they celebrated a stunning 14.5 to 13.5 victory over the United States of America.

Moving into the final day of singles matches the United States team had a big lead and a big home crowd in its favour.

Many had written the Europeans off – the American power and home advantage seen as too much of a hurdle to overcome.

It was to prove a false sense of security for the Americans as what unfolded was one of the most remarkable comebacks or collapses in the 85-year history of the Ryder Cup.

“Last night, when we were having our team meeting, I think the boys understood that believing was the most important thing,” said José María Olazábal, the European captain.

Olazábal loaded the European opening singles lineup, putting his in-form players on course early in an attempt to commandeer the momentum. It worked. 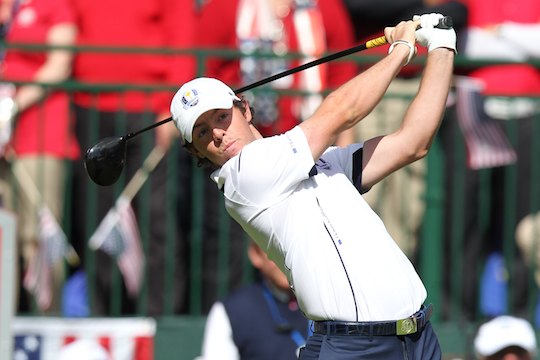 With five important points banked early, the Europeans still needed three more, and though the Americans appeared to have calibre firing power still out on the course, their established stars ultimately cracked on too many occasions.

Martin Kaymer, the 2009 PGA Champion who has not done much since, still had enough composure and touch to defeat Steve Stricker by holing a three metre putt on the 18th hole to drive the final nail into the coffin.

Europe won eight of the 12 singles matches and got a half from Francesco Molinari in the anchor match against Tiger Woods.

“We know what it feels like now. Everybody on our team was playing so well, we just figured it didn’t matter how we sent them out there. We just got a couple of matches flipped there in the middle that cost us.”

In the end, Europe did what the United States could not – close a match out on the 17 and 18 holes.

Player after player from the European team put all-square matches to the team’s total with stunning, clutch play on the final two holes at Medinah – both brutes with a testing par-3 over water and a closing par-4 up hill which requires precision driving from the tee.

Six of the twelve matches went to the 18th hole on Sunday. The Americans won only one of them.

Mickelson and Furyk both led by one standing on the tee at 17. Both lost their matches. Woods and Stricker, players who had lost all three of their previous matches together this week, could not close it out on the final two holes either.

This Ryder Cup was so close, so tense, that either side could have won down to the very end.

The Europeans had rallied to take the last two matches on Saturday and that gave them desperately-needed momentum to roll into Sunday with optimism.

They came out all guns firing on the final day, displaying the self-belief and fighting characteristics you only see in events like the Ryder Cup. Europe’s top five players in the singles lineup all won, including Rory McIlroy.

It worked and the Cup returns to Europe and the stage is set next in 2014 at Gleneagles, Scotland.