The European Tour has confirmed plans for the resumption of its 2020 schedule with the announcement overnight of the all-new “UK Swing”.

The six-week full-field series will kick-off the European Tour’s revised 24 event schedule that will run from late July through to its culmination at the DP World Tour Championship in Dubai on December 13th. 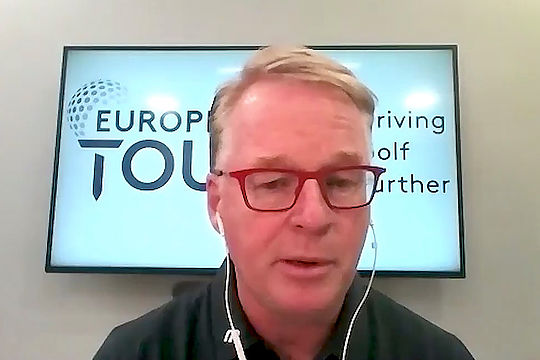 CEO Keith Pelley discusses the resumption of the European Tour

“Since the suspension of our 2020 season in early March, we have taken a measured approach in reassessing our schedule, informed every step of the way by our medical advisers and government guidance,” said Tour CEO Keith Pelley.

“We have consistently said that safety is our absolute priority and that is why today we are announcing our resumption in two months’ time supported by a comprehensive health strategy which has been led by our medical team.”

“Without question we have had to think differently about the remainder of our 2020 season which is reflected in today’s announcement. As golf’s global Tour, diversity is ordinarily one of our biggest strengths, but in this instance it has become one of our biggest challenges.”

The “UK Swing”, which will be spectator-free, begins with the British Masters on July 22nd, followed by the return of the English Open a week later. The English Championship is next up on August 6th before the Tour heads to Wales for the Celtic Classic (Aug 13-16) and the Wales Open (Aug 20-23).

The UK Championship will book-end the six-week series on August 27th and all tournaments will feature a €1,000,000 purse.

Pelley indicated that a majority of the events from September through to November will be announced at a later stage and will be largely determined by the outcome of the pandemic in various countries.

While the weekly events are yet to be finalised, the Rolex Series events are locked in and will begin with the Scottish Open on October 8th followed by a return to England for the BMW PGA Championship on October 15th at the Wentworth Club.

The Nedbank Golf Challenge (Dec 3-6) in South Africa will mark the third event of the Rolex Series before the Race to Dubai winner is crowned at the season-ending DP World Golf Championship on December 10.

While the resumption is welcome news for everyone involved, Pelley made it clear that no player should feel pressured to play and reiterated its exemption status for 2021.

“We recognise that when we resume playing golf, each player’s circumstances will be different. We therefore do not want to put anyone in a position whereby they feel they have no choice other than to play in certain events in order to protect their livelihood.”

“Similarly, the feeling was that it was not fair to disadvantage any member who might want to play in an event but who might not be able to due to ongoing travel restrictions. Therefore, in consultation with our Tournament Committee, it was agreed preserving their exempt status for 2021 was the fairest solution in these unprecedented times.”

“As a consequence, there will be no Qualifying School this year and no formal graduation from the Challenge Tour, although the Tournament Committee has agreed to reward exceptional performance on both the European Tour and the Challenge Tour in 2020, precise details of which we will announce in due course.”

Pelley was also quick to reassure everyone that, despite rumours to the contrary, the Tour is financially stable, thanks in no small part to the Tournament Development Fund that was set up in 2017.

With sponsorship funds dwindling and big-name promoters struggling, Pelley may well end up having to fund more of its own tournaments just to make it through to 2021.