The Australian PGA Championship will reach more than 500 million viewers globally and be the richest tournament in Australia in 2015 thanks to a new co-sanctioning agreement announced today with the European Tour.

The Championship, the oldest and most prestigious professional tournament on the PGA Tour of Australasia, will be played at the RACV Royal Pines Resort from the 3 – 6 December 2015 and is expected to attract a number of the world’s best players with the prize fund increasing to AU$1.75M. 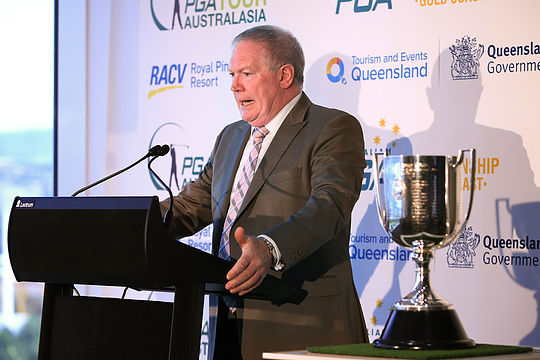 PGA of Australia Chief Executive Brian Thorburn said sanctioning with the European Tour would provide a greater reach with a new broadcast agreement through Europe, Asia and the US.

“This will be the highest purse in Australian PGA Championship history and will position the tournament more strongly on the international stage with exposure to a greater broadcast platform than any of our previous tournaments.”

“This is a huge step forward for the tournament to rank alongside many of the great tournaments in Europe and Asia. The partnership will also provide the opportunity to improve the strength of the field through the greater depth of international players currently playing on the European Tour,” he said.

In addition to the 1st place cheque of A$315,000 from RACV Royal Pines, the winner of the 2015 Australian PGA Championship will be granted exemption into the 2016 WGC-Bridgestone Invitational and the 2016 BMW PGA Championship at The Wentworth Club in the UK, and compete for the A$19.5M in prize money at those events.

“As the last tournament of 2015 the Australian PGA Championship caps off what will again be another exciting year of Australian golf,” Thorburn said.

PGA of Australia is working on broader and enhanced playing opportunities at a number of different tournaments for its entire Australian membership in the medium to short term.