Matt Every has won the Arnold Palmer Invitational for the second straight year, making an 18-foot birdie putt on the 18th hole at Bay Hill for a closing 66 to beat Henrik Stenson by a stroke and set up an appearance at next month’s Masters. 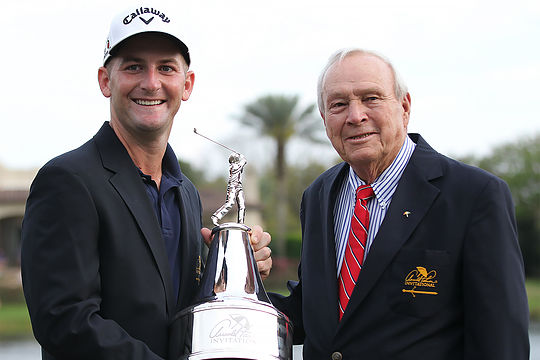 Every came from three shots behind Sunday by matching the low score of the final round. Needing a birdie to force a playoff, Stenson was left with a 20-foot putt at the 18th yet was unable to convert handing the title to Every.

“It feels great,” said Every about his return to Augusta National.

The victory is significant for Every, who last season had racked up six missed cuts and a withdrawal in his final 13 starts.

“It’s a weird game,” said Every after his victory. “Sometimes you have to go backwards to go forwards and I feel like that’s what I did.”

On Sunday, he bogeyed the opening hole but made seven birdies the rest of the way, which included three in a four-hole stretch around the turn and the tournament winner from 18 feet on the final hole.

In contrast Henrick Stenson had let another tournament slip.

Stenson was angry with being put on the clock on the 15th hole by officials, the second time the final group was out of position, and closed with a 70 to extend a peculiar streak on the PGA Tour.

Stenson was a shot ahead with four holes to play, but paid for three-putting at the 15th and 16th which stopped his momentum.

“Really, problems kind of started on 15,” said a disappointed Stenson.

“It’s busy enough trying to close out a golf tournament and to play the finishing holes without being on the clock. I did not see the reason for that really.”

Stenson said he rushed his first putts on the 15th and 16th, and the three-putts were “really what cost me the tournament.”

According to the officials at Bay Hill, Stenson’s pairing with American Morgan Hoffmann was the slowest of the day.

Australia’s Matt Jones finished a creditable 3rd at 17-under, two strokes behind Every for another impressive tournament.

Jones, who will defend his first US PGA Tour title in two weeks at the Houston Open, made three straight birdies from the 15th hole as he fired a 68 to finish outright third, two strokes clear of fourth-placed American Morgan Hoffman.