Ally Ewing played the last seven holes in five under to hold off a charging Xiyu Lin at Kenwood Country Club in Cincinnati to win the inaugural Kroger Queen City Championship and in the process collected her third LPGA Tour victory.

Ewing finished at 22-under-par for a one-shot victory over Lin and becomes the fifth American to win on the LPGA in 2022. 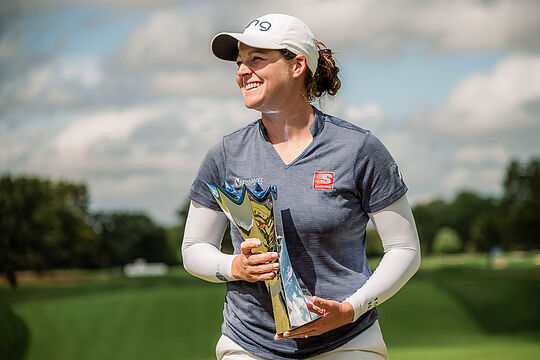 “I struggled with nerves all day because I just haven’t been able to put this together for a full tournament this year,” said Ewing. “So, to see it and all the results finally come into place, it’s really exciting.”

The win was timely for Ewing who has not had the strongest of seasons. Her best finish so far before Sunday’s win had been a tie for 11th in January at the Gainbridge LPGA most of her results in the high 30′s, including five missed cuts.

“I’ve been hitting it great. Driving it great. It’s just kind of been — mentally I’ve kind of struggled with the putter,” remarked Ewing. “I’ve seen some putts miss and then I’ve gotten down on myself, so this win is a great booster.”

Sarah Kemp finished the best of the Australians in 8th position at 12-under-par for her best result this season on the LPGA Tour and an added bonus of a US$43,589 pay day.

Hannah Green was in a share of 24th position at 6-under-par to round out the Australians making the weekend.

Lee still stands atop the Race to CME Globe via six top-10 finishes including two wins, with year to date earnings of US$3,742,440.

The next event on the LPGA Tour schedule is the AmazingCre Portland Classic starting 15th September at Columbia Edgewater Country Club in Portland, Oregon.