Fox fired a 5-under 67 for a two round total of 9-under the card to lead overnight by two shots from South Australian Adam Bland. 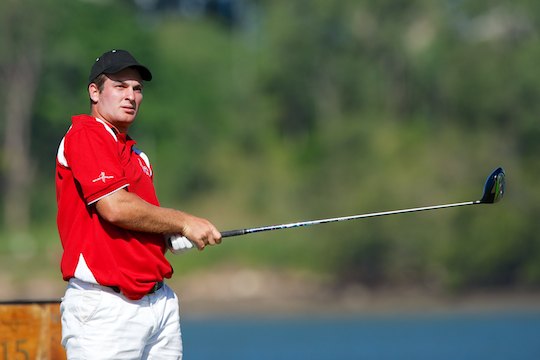 “It’s been a really solid couple of days; I had been struggling with the putter a little bit this year but managed to get it going on the back 9. It’s nice to be in contention again,” said Fox who won the WA Open last year.

“I made an eagle on 10 from almost on the 9th fairway; I hit a gap wedge over the trees and then holed a 20 footer for eagle.”

“That kick started everything for me and I hit some good shots on the back 9 to inside 15 feet, IT kept rolling good and had a few go in, it was a good day out there.”

Enjoying his time competing at Huntingdale Golf Club, Fox was still an amateur the last time the Australian Masters was played at the course.

“It’s fantastic it’s the first time I have got to play here, it tests every part of your game, especially like what we had yesterday afternoon, it’s great to be able to play a sandbelt course in a tournament,” added Fox who believes the reason for his consistent play is a lack of stress.

“I try to hit a good shot and not really worry where the balls goes, I tried to do that all of last year and it worked for me so I figured there is no point of changing a formula that worked.”

Fox also leads the SEN Challenge where he has partnered with his friend, Gerard Peterson who plays off a handicap of 10, in the teams event.

The pair combined for a 15-under 57 in the four ball, best ball format.

“I play with Gerard a lot back home, probably two or three times a week, he generally goes alright and drives the ball pretty straight and can putt alright, he just struggles with his irons, today he had a day out,” added Fox.

“He holed a sand wedge on the second hole (par-4) from 60 metres and then holed a 60 footer on 11 for birdie, net eagle. He then hit a 2-iron on the last to four foot and made net eagle as well.”

The second round cut of the Mercedes-Benz Truck & Bus Victorian PGA Championship was made at 1-over the card with 51 Professionals making it through to the final two days.

The SEN Challenge was cut to the leading 40 teams.