Jarryd Felton is making a habit of winning national amateur events proving his standing as one of our top-ranked amateurs. 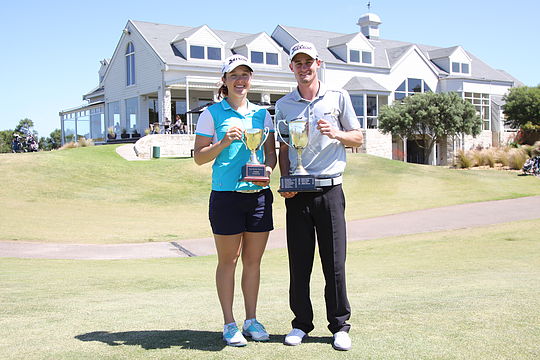 Felton fired rounds of 73-67-67-73 to finish at 8-under and in the process disposed of a number of ‘fancied’ players such as Brett Coletta who recently was named in Golf Australia’s National Squad with Felton still remaining on the outer despite his fine run of success.

In September, 19-year-old Felton secured his second straight Mandurah Amateur title, which added to wins at the Tasmanian Open, NSW Amateur and the 2013 Queensland Strokeplay.

“I’ve been able to keep proving myself at the amateur level,” said Felton regarding his staggering run of success.

“This week I’ll test myself at the next level with a start at the NSW PGA Championship, which is something I’m really looking forward to as ultimately that’s where I want to be playing in the professional ranks.”

Teeing it up with the professionals gives Felton not only the added experience and opportunity to see where he stands within the bigger leagues, but also better status ranking points under the world amateur ranking system.

Felton has already proved he can top the amateur ranks, yet he’s not been fortunate like a number of other preferred amateurs to get starts in recent Australian professional events like the Australian Masters and the Australian Open.

Not having the opportunity to get starts in these Tier 1 Australasian Tour events has dinted his world amateur ranking progression, which sees Felton just outside the top-50 at 54th position to be our 5th highest ranked amateur.

With a top-5 finish at the WA PGA Championship last month after starting the final round in outright second, Felton knows his game is heading in the right direction and he’s remaining patient regarding his current standing with the amateur authorities.

“I’ve revelled in the chance to play in professional events and it’s been a great confidence booster for my game,” says Felton.

“I’ve got the Australian Master of the Amateurs and the Australian Amateur coming up early in the new year and I’m planning for my UK and US amateur schedule now.”

“Hopefully this year I can go one better and get that international victory, that’s the plan.”