With half-a-metre of rain falling on the Bonnie Doon layout during the week, the tournament was lucky to be able to go ahead. However, more heavy showers on Sunday proved to be the breaking point and officials were forced to abandon the final round at 3:30pm and revert to the 54-hole scores. 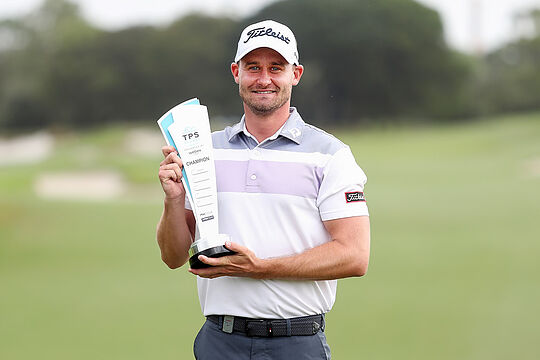 Sitting on 15-under, Felton and Brendan Jones headed to the 18th hole to decide the match. Jones put himself in a good position but missed his birdie to hand Felton his fourth Australasian PGA Tour trophy and his first since the WA PGA in 2020.

“When I hit it in the rough I kind of thought to myself, That’s probably a good result,” said Felton.

“Jonesy hit that wedge in there and had to kind of fly it to the back edge and it didn’t come back as far as what he would have thought.”

“It was definitely an advantage hitting it in the rough…accidentally.”

The 26-year-old has struggled this year with two missed cuts (TPS Victoria and Vic Open) and a disqualification at the Australian PGA in Brisbane but has been working with mental coach Sean Lynch on improving that side of his game.

“Now that we’ve got tournaments to play I’m more motivated to get better.”

“I’ve got a lot of good things going, I’ve just got to stick the path and just keep trying to get better each day.”

“That’s what myself and Sean are working at and it happened to happen really quick this week.”

Newcastle’s Jake Riley, who qualified for the 2019 NSW Open as a 14-year-old, won the TPS Junior Players Series Sydney with an opening round 5-under 66. Initially a 36-hole affair, the abandonment of play on Sunday meant that the junior tournament was reduced to just 18 holes.

The Australasian PGA Tour now moves north for the inaugural TPS Hunter Valley at the Cypress Lakes Resort on Thursday.