Playing in the morning field, Felton fired 6-under 66 to continue a strong showing for the West Australian at the Twins Creek Golf and Country Club after he finished tied 6th at the tournament last year. 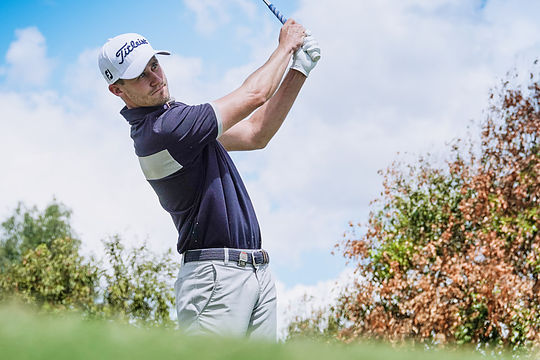 “I don’t normally make that many birdies, but I made them today so hopefully I can keep it going over the next three days,” said Felton.

Today’s performance also signals a turnaround in form with the flat stick for Felton, just in time for the last three events of the year on the ISPS HANDA PGA Tour of Australasia.

“I only missed one green today so I gave myself a lot of chances. They paid off at the end of the day, I made some nice putts. My putting has been horrific lately so it’s nice to see it turn around,” added Felton, who rolled in a 40 foot birdie putt on the par-5 15th.

Playing in the afternoon field, rookie Pro Cameron John rolled in a birdie putt on the 18th to tie Felton at the top of the leaderboard.

It’s a solid feat for the 19-year-old who is currently playing injured while trying to shore up his place inside the top-50 on the ISPS HANDA PGA Tour of Australasia Order of Merit.

“The putter was pretty much on fire today. I have been feeling good about my game but I was struggling on Monday, I wasn’t sure if I was going to play,” said John.

“I have a bulging disc in my back, so I have been struggling with that. I wouldn’t have been able to play without the help of Matt Green, the Tour physio.”

“Given my spot on the Order of Merit, I need to play everything, so I have played my 5th week in a row while injured.”

“I want to go to Asian Tour School at the end of the year so it is a big advantage to be top-50, I am currently 42nd, so it’s important to play well. The higher I finish on the Order of Merit the more opportunities I get, the Aussie Tour is great for that.”

Victorian PGA Champion Aaron Pike, who arrived at the course just 10 minutes before his 7.15am tee time due to a mix up with his alarm, fired 5-under the card to be one of 10 players tied second.

Joining the logjam at 5-under the card was Matt Millar who has earned the nickname of Mr Consistent on the ISPS HANDA PGA Tour of Australasia.