Jarryd Felton dug deep with a birdie barrage to hold off a determined Brett Rumford to win the Western Australian PGA Championship on Sunday at Kalgoorlie Golf Course.

Commencing his final round a shot behind Rumford and Braden Becker, Felton fired an equal course record of 8-under 64 to win the title by a shot from Rumford with Daniel Fox finishing in third position, five shots from the leader. 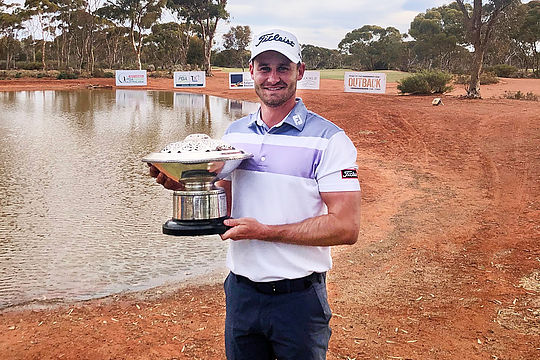 “I’ve been playing great all week but I putted horrifically the first two days,” said Felton.

“I was 5-under but I honestly think I missed two greens for 36 holes so I struck it unbelievably good. I gave myself chances on pretty much every hole and just couldn’t get anything to go. It was all to play for today.”

“I’ve led here for a lot of the time so it was good to come from behind and put the pressure on the leaders.”

The win sees Felton climb to his highest world ranking of 483rd and makes amends for his runner-up finish in the same event last year.

“I holed a nice putt on 12 and for anyone who can remember that’s where the disaster started last year,” said Felton.

“I bogeyed 12 and 13 and Darren (Beck) went birdie-birdie. I went birdie-birdie this year to open up my round and really push for the win. I holed those two putts and I walked to the next tee thinking that maybe someone was looking after me this year.”

“The brain does funny things. It made me remember real quickly about what happened there 12 months ago that’s for sure.”

The win also adds to a list of Australasian Tour wins for Felton which include the 2017 NZ PGA Championship and NSW PGA Championship in 2015. He also finished runner-up at the 2019 NSW Open.

Felton does have limited status in Europe and can play the Challenge Tour. It’s a difficult time not only for Felton by any emerging professional to plan a competitive schedule.

Yet Felton has spent a good part of the COVID-19 situation preparing and keeping focused. Sunday’s win certainly proved he’s got the stamina and talent to progress to the next level.

His best international effort was a runner-up at the Argentine Stroke Play in 2015 before securing a top-10 at the Southern Amateur in the US.