The win adds to victories at the City of Perth Championship and the Mandurah Amateur, as well as the Queensland Amateur Stroke-play title. 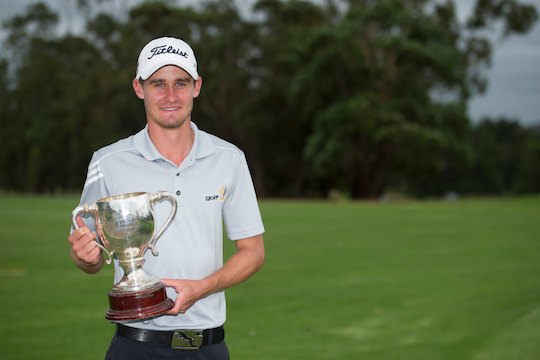 Add into the mix Felton’s runner-up result last week at the Lake Macquarie Amateur to England’s Ryan Evans and the 18-year-old Golf WA representative is currently one of the hottest amateurs around.

“I’m happy where my game is at,” said Felton following the win.

“There have been a few trump starts so far this January and I’m looking forward to the next set of events. Hopefully, I can win another.”

Felton is scheduled next to play the Tasmanian Open at Country Club Tasmania, starting Thursday, before competing at the Victorian Open and then the Riversdale Cup in early March.

“It will be great to test my game against the pros at Vic Open, but I’m also looking forward to Tassie as well,” says Felton.

“I guess my recent results show that I can compete against the best and out on the course I fell confident executing the shots that I need to get the result.”

Less than six month’s ago Felton sat outside the top-500 in the R&A World Rankings.

Today’s win should see him sneak inside the world’s top-50 and with that, all the trappings of being labelled one of the world’s best amateurs. For a start it gains him automatic entry to the British and US Amateur Championships.

“It’s happened so quickly,” says Felton as to his move in the world rankings.

“I’ve worked hard with Richie Smith back in WA, who I’ve been seeing since I was eight years old and the hard work we have done together is paying off.”

When asked what it is that has seen him bank the results, Felton makes reference to some light reading on the subject matter which he claims has turned his game completely around.

“I read two books, ‘Putting out of your Mind’ and ‘Golf is not a game of perfection’ and it’s made a world of difference,” says Felton.

“Somehow it just clicked and my putting has just improved over the last three months and I view the game differently.”

When Bannan won the 16th with par, after Felton missed a flop approach, the tension was clearly back in the match with some feeling a collapse was a possibility after Felton had at one stage progressed to 4-up.

But to the Western Australian’s credit his majestic ball striking was always going to prove invaluable in the fickle conditions, which Bannan was trying to come to terms with as his preferred shot was a high fade and this was proving problematic for the Victorian.

When Bannan cut his drive on the 17th into the rough and Felton nailed a mid-iron to the centre of the green after a peerless 3-wood from the tee, the match had finally fallen Felton’s way.

“I had two tough matches to end this event,” said Felton.

“I’ve proved to myself that I can close the match out, today was an other example and that builds your confidence.”

Felton overcame good mate and fellow Western Australian Curtis Luck in yesterday’s semi-final with a 2&1 victory to set up his finals appearance against Bannan, after Bannan defeated Dale Brant-Richards, 1-up.