Western Australian Ben Ferguson has secured a 3rd place finish at the St Andrews Links Trophy in Scotland finishing two strokes behind Englishman Matthew Jordan who took out the prestigious amateur title with a 11-under total and stroke win over Ireland’s John Ross.

Jordan’s win was on the back of some stellar performances this summer in the UK including a 7th placed result in the Lytham Trophy, a 4th in the Irish Open Stroke-Play, 5th in the Brabazon Trophy and, seven days before this success, runner-up in the Scottish Open Stroke Play Championship at Western Gailes. 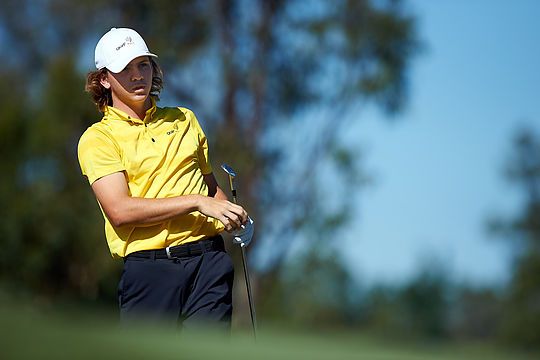 To Ferguson’s credit he remained in the mix firing rounds of 70-68-71-70 to finish at 9-under-par, the only Australian carding a top-10 finish at St Andrews. The result follows a tied 12th result the week before at the Scottish Open Stroke Play. Ferguson’s previous best result was medallist honours at the 2017 Western Australian amateur and a runner-up finish at the South Australian Amateur Classic.

David Micheluzzi’s UK trip continues to be impressive with the Victorian finishing at 3-under and in a tie for 23rd position. Micheluzzi opened with an impressive 67 and 71 in challenging conditions followed by rounds of 73-74.

Fellow Victorian Zach Murray finished in 32nd place at even par following rounds of 69-73-74-72 to round out the Australian contingent who made the even par cut mark.

Haydn Barron narrowly missed the final 36-hole rounds finishing at 1-over, with Will Heffernan and Min Woo Lee at 2-over along with Blake Collyer and Harrison Endycott.

Travis Smyth finished at 3-over after opening with a 78 only card an impressive second round 69. She Wools-Cobb was at 4-over, with Dylan Perry and James Grierson at 5-over. Blake Windred shot consecutive rounds of 75 to finish at 6-over along with Kyle Michel.

Charlie Dann and Alex Henderson rounded out the Aussies with Dann at 10-over and Henderson at 16-over.

The Aussies will compete in the 122nd British Amateur at Royal St. George’s and Prince’s starting June 19-24. The tournament is considered one of the globe’s top two amateur golf competitions and continues to attract the most international field in the men’s amateur game, with 288 competitors from 40 countries.

The reward for the winner of The Amateur Championship is a place in the 146th Open at Royal Birkdale in July and the 2018 US Open at Shinnecock Hills. Traditionally, the Amateur Champion is also invited to compete in the Masters Tournament.