Ewen Ferguson has joined Scottish golfing greats Paul Lawrie and Colin Montgomerie winning twice in a year with his comfortable three-shot victory at the ISPS Handa World Invitational at Ballymena in Northern Ireland.

Ferguson, 26, led from start to finish, and despite a ‘bloody rotten’ sleep ahead of the last round, the young Scot posted a final one-under 69 for a 12-under-par tally on the Galgorm Castle course. 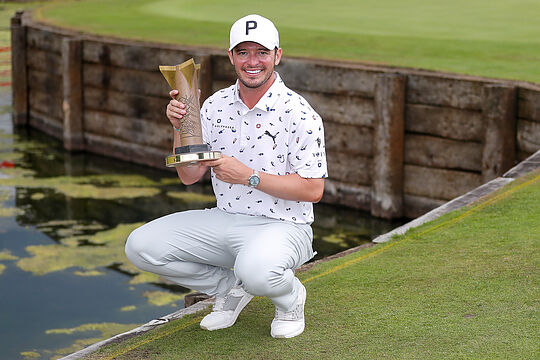 The last Scot to win twice in the same year was Lawrie a decade ago at the 2012 Qatar Masters and Johnnie Walker Championship at Gleneagles while Monty last won twice in a year in winning the 2005 Alfred Dunhill Links Championship and two months later he banked victory in the UBS Hong Kong Open.

Ferguson broke through last March, and in his 37th Tour event, winning the Qatar Masters and now 13 events on, and in event No. 50 he’s also won on British soil for the first time.

He said: “It feels unbelievable to win twice in a year, and I can’t believe how calm I was out there and it could not have worked out any better for me”.

If there was any pressure for Ferguson he admitted it was winning wire-to-wire but he took comfort in American good friend Sean Crocker two-weeks ago leading from start-to-finish to seal success at the Hero Open at the Fairmont Resort on the outskirts of St. Andrews.

Ferguson said: “I’m good friends with Sean and seeing him win wire-to-wire in St. Andrews. I also broke the course record that week (61), but what Sean did gave me the belief I could do it, as well.”

“I felt comfortable handling the extra pressure, and thought after the 61 on Thursday, it was a great opportunity for me.”

“The only problem is that I went to bed last night and my sleep wasn’t too great. Actually, it was bloody rotten so to win is unbelievable”.

Also, helping Ferguson was playing the first two rounds in the company of his close friend and travelling room-mate Connor Syme, and then as it turned out the pair were grouped for the last round.

And while losing out to Ferguson, Syme superbly birdied the 72nd in a score of 69 to share second place at nine-under with Spain’s Borja Virto, and then there was the great sight of the two Scots walking from the green with their arms around each other.

Syme had been there at the back of the green on the first Sunday in March to comfort Ferguson when he blew a four-shot lead, shooting a horror last day 76 and finishing eighth.

Four events later, Syme was helping his good friend celebrate victory in Doha and then at Galgorm Castle the duo stood tall out in the last group and Syme again helped Ferguson celebrate.

“So, playing with him was good as I was trying to hold each other off, and I can’t believe I am a winner again.”

And while Ferguson was talking of celebrating with a Sprite and black currant juice, Syme had other ideas walking out from the clubhouse with two bottles of beer in his hand, and one for his good friend.

Victory lifts Ferguson 17 spots to 17th on the Race to Dubai money-list while the Scot should jump 46 spots to the new World No. 165th this week.

For Syme, it was his second straight second place finish and a sixth top-3 effort in 105 Tour events as the Fifer looks to win a maiden Tour win. He has jumped 11 spots to 21st on the Race to Dubai.

Jake McLeod topped the small Australian field finishing in a share of 23rd place on 2-under. Zach Murray was the only other player to make the final round in 32nd position.

Elvis Smylie (+3) and Jordan Zunic (+5) missed the initial 2-over 36-hole cut line. Dimitrios Papadatos (+6) and Maverick Antcliff (+2) then made it through to Saturday before missing the final round after failing to make the even par cut line after 54 holes. Only the top-35 and ties qualified to play on Sunday.

Next up on the DP World calendar is the €1,750,000 D+D Real Czech Masters in Prague, Czech Republic on Thursday.