Scotland’s Ewen Ferguson was right at home marvelling in the Scottish-like conditions to brilliantly capture a maiden Tour victory at the Commercial Bank Qatar Masters in Doha.

Ferguson, 25, bravely fought back from a second hole double-bogey to sensationally chip-in for eagle at the 16th and celebrate also his first pro career victory with a closing round 70 for a one-shot win at 7-under on the sunny but windswept Doha Golf Club course.

The Glaswegian also celebrates the Tour’s 50th anniversary becoming the third Scot to be handed the stunning ‘Mother of Pearl’ trophy after Andrew Coltart captured the maiden event in 1998, and with Paul Lawrie winning in 1999 and again in 2012, and with Ferguson phoning his delighted mother on Mothers’ Day.

Ferguson ended his round around an hour before victory was confirmed and the top-two overnight leaders in England’s Matthew Jordan (76) and Poland’s Adrian Meronk (75) falling from the front to finish a respective T5 and T3.

Ferguson’s victory sensationally also amends the bitter disappointment of letting slip a four-shot lead going into the final round earlier this month at the Magical Kenya Open, and in finishing eighth in Nairobi.

He said: “It feels unbelievable to win. I can’t believe it, at all. Given the conditions, it was one of those days I just kept fighting to the end. I’ve also been in contention a lot the last few years, including Kenya, so I’ve now managed to win.”

“It was getting to the point I thought ‘will I ever manage to win’, so to finally get over the line is so good, and I cannot believe it.”

“Hopefully, my win can continue to inspire people in Scotland to want to play golf, and get out here, and win, as well. Also, I hope it inspires guys like Craig Howie, who played this week, to get that first win, too.” 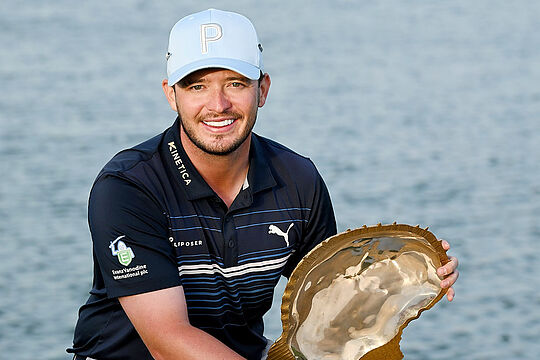 One of the first congratulatory text messages was from his good friend Connor Syme, who had been at the back of the 72nd green in Nairobi, to wrap his supporting arms around Ferguson when the Scot let slip a four-shot lead, and eventually finished eighth.

Ferguson said: “Connor is my best pal out here, and he’s been so happy for me and many of the Scottish guys have been texting me.”

“I spoke to my family and with my dad saying he was so, so proud of me. He always says that to me, anyway, and makes me feel relaxed every day. When I am out there, I am making him proud by trying my best and that’s all you can do.

“My dad told me I would get a first win eventually, so I’ve just kept working on it. I have been in contention enough on the Challenge Tour, and in recent weeks I’ve put myself in the picture to win, including Kenya.

“I just managed to deal with it today and I am a winner now, and it’s incredible”.

Ferguson also singled out his coach and South African-born Jamie Gough, who owns a house in Anstruther, also for special praise, and also for Gough’s what proved pivotal pre-final round advice.

He said: “Jamie has been great in working with me, as we have been changing a lot of stuff just to make sure my swing is right. We have worked on so many aspects of my game, and he’s been brilliant.

“He also suggested I get to the course earlier than normal, saying my chipping was not good enough, so I worked on it and worked on it and you saw the benefits of that on 16. I also played a decent chip there at the last.”

“You just need to continue to practice, as you can’t let anything slip out here, and it paid off today, so I’m thrilled.”

The wind had helped Ferguson on day three and with the final round again with winds of around 15-20 mph and gusting at times to 35mph, and he could not have been happier for the Scottish player who has grown-up in similar conditions.

He said: “The Tour mentioned it was going to be again windy, and I am from Scotland, so that suited me fine.”

The victory earned Ferguson a two-year Tour exemption and a prize cheque for £255,377, and easily the biggest cash prize of his pro career.

Ferguson also is the 144th winning Scot in the 50-year history of the Tour, and it continues now five years in succession a Scot has won at least once in a season on the DP World Tour.

What now is slightly disappointing, especially for the rank-and-file Tour players like Ferguson, is that unless you are heading to next month’s Masters, it now means a three-week break from competition until the April 21st starting Spanish Open.