Gonzalo Fernandez-Castaño produced a stunning final round to win the first Final Series event on The Race to Dubai at the BMW Masters presented by SRE Group.

The Spaniard survived a late wobble at the last – he found two bunkers en route to a double bogey six, but 17 holes of flawless ball striking had given him sufficient room to claim a seventh European Tour title with a closing 68 and 11 under par total at Lake Malaren. 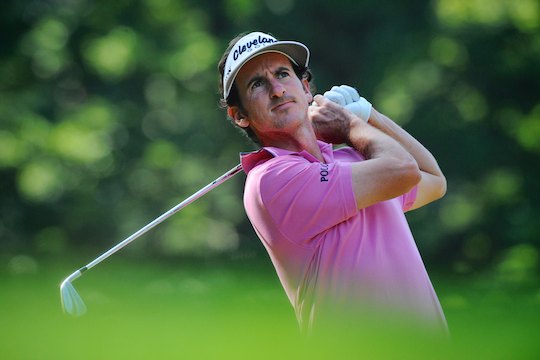 That was one shot ahead of Seve Trophy team-mate Francesco Molinari and Thailand’s Thongchai Jaidee, the Italian coming from six shots off the pace at the start of the day.

The Ryder Cup star’s chances looked to have disappeared with a bogey at the 12th despite a front nine of 34, but Molinari then went on a brilliant scoring run, making an eagle on the par five 13th and following that with four birdies in succession to join Fernandez-Castaño on 10 under before eventually completing a superb 64.

Fernandez-Castaño edged back into the lead with a birdie on the 13th and looked to have sealed a comfortable win with further birdies at the 15th and 17th, where he chipped in from just over the green.

He made hard work of the last, though, finding sand off the tee and another bunker with his third shot before holding his nerve to complete his first victory since last year’s Open d’Italia.

“I knew it wasn’t going to be an easy round, especially the way I started. I started hitting the ball pretty bad,” Fernandez-Castaño said. “But my caddie kept me cool and told me how good I had been hitting the ball through the week and I played fantastic after that.”

“On the last I played too conservative and it was a fighting six at the end for sure.”

“BMW is one of the great supporters of The European Tour through the years, they know how to run events and they make the players feel so comfortable.“It’s pretty much like playing at home and it’s also great to see the crowds this week. I think they have been pretty amazing.”

Guthrie finished two shots behind on nine under after a closing 71, with Thomas Björn, Peter Uihlein and Pablo Larrazábal a shot further back.

Defending champion Peter Hanson finished seven under after a superb closing 63, the Swede having started the tournament – which does not have a halfway cut – with a round of 79.

The win moves Fernandez-Castaño into the top five on The Race to Dubai and greatly improves his chance of a Ryder Cup debut at Gleneagles next year.

“It’s perfect timing because it’s Ryder Cup qualification period right now,” he added. “It doesn’t get any better than this; first event of the first ever Final Series and I got the victory.”

The Final Series remains in China for next week’s WGC-HSBC Champions, before heading to Turkey and then Dubai, where the top 60 will compete for the DP World Tour Championship.