Kalgoorlie’s Connor Fewkes has braved difficult conditions to climb to the top of the Australian Boys’ Junior Championship leaderboard after a two-under-par 68 ensured the West Australian left-hander a one-stroke advantage at Gosnells Golf Club.

Fewkes is being hunted by fellow Sandgropers Cooper Geddes and Jose De Sousa, with both at three under heading into the 36 holes of tomorrow’s final day. 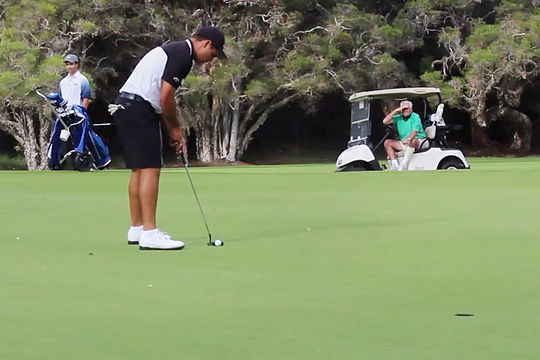 It could have been better for Fewkes had he not penalised himself on the 9th for hitting sand on his backswing, turning at one under.

The back nine proved fruitful for the WA skipper landing two birdies and a bogey to finish with 68.

Geddes remained at his consistent best through his second round, with two bogeys on 11 and 12 matched by birdies on 13 as well as 17, to finish with 68 & 69 over his two rounds.

De Sousa’s round was highlighted by an eagle on 16 and despite having the lead with three holes to play, the Gosnells local had bogeys on two of his final three holes to finish a stroke behind.

Queensland’s Louis Dobbelaar led overnight but struggled in heavy rain to record a three-over-par 73 on Thursday.

The Brisbane gun trails by three shots heading into the final two rounds, however will fancy his chances in the 36-hole finish.

WA hopeful Jordan Jung looms as an outside chance after rounds of 70 & 69 gave the Melville youngster a tie for fourth. Jung is in form at the course after clinching the Gosnells Open just a fortnight ago.

Lewis Hoath and Josh Greer are tied for sixth at even-par.

The final day will begin at 7.00am, with players to complete 36 holes.