Medallist Chris Williams has placed himself among the final four survivors who will decide the Western Amateur championship on Saturday at Exmoor Country Club just outside Chicago.

Should Williams claim the title he will take the world number 1 ranking in the process from fellow American, Bobby Wyatt. 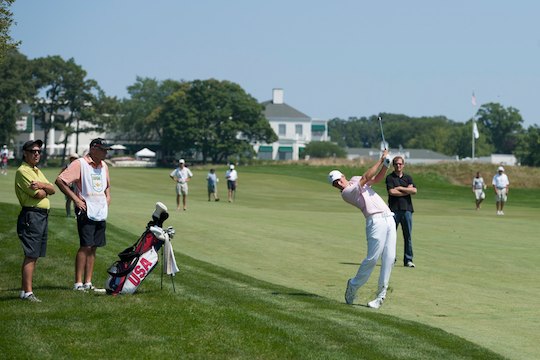 Chris Williams nails his approach into the 10th at Exmoor Country Club during the quarter-final of the Western Amateur (Photo: Anthony Powter)

Williams, a University of Washington senior, won his morning match against Richard Lamb 6&5. Yet his afternoon encounter against South African native Brandon Stone was a tussle.

Stone has been touted by Ernie Ells as the next generation of player to come from South Africa and Stone today showed all class in his match against Williams after winning his morning match against Zac Blair, 1-up.

“That was one of the toughest matches that I have ever experienced,” said Williams. 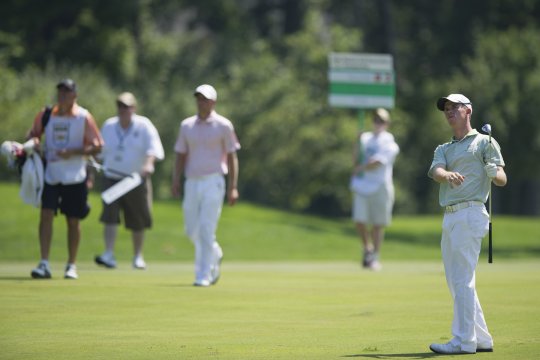 “He made everything including a downhill snake of a par putt from above the hole on 16. I was glad to see the finish of the match.”

Russell defeated Kevin Penner 2&1 in the morning match to set up an afternoon encounter with good mate, Justin Thomas, who’s ranked among the top 10 amateurs in the world.

Russell then went out and birdied four straight holes to take a massive lead – getting one stage to 5-up through 11 holes to ultimately win 4&3 over Thomas.

“It was tough because Justin is one of my good friends,” said Russell.

“But you come here to win…My short game has been really good and my iron play has been, too.”

As far as amateur tournaments go, The Western Amateur is one of the prized amateur championships on the world golfing calendar.

It is a tournament any amateur wants to bag and with the class of players remaining with the likes of Williams, Russell, Ancer and Williamson, it promises to be another thrilling final day at the Western Amateur.