Defending champions New South Wales will battle against Queensland for the Australian Interstate Teams title tomorrow at the Tasmanian Golf Club in Hobart.

Following five rounds of matchplay, Queensland secured the top honours by half a match over New South Wales after each team won 3½ contests and the difference coming down to individual matches. 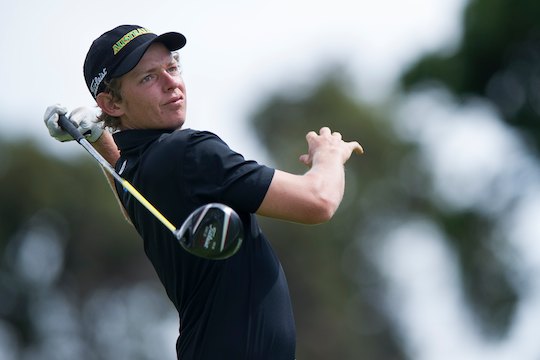 Queensland managed to secure 21½ individual matches, with New South Wales winning 21 matches, with Cameron Smith a standout performer remaining undefeated so far in these series and demolishing Victoria’s Nathan Holman in today’s round, 9&7.

Smith never let Holman into the match, firing six early birdies to get to five under after 11 holes in an impressive display of classic matchplay.

Tasmania will play against Victoria for third position after they both finished with 2½ contests won, with the home state pipping Victoria by five individual matches.

The classic match-play encounters are never lacking during these series, producing interesting results between our top-ranked amateurs.

With proposals being considered by Golf Australia to modify the Interstate Series into a combined Men and Women stroke play format, such classic encounters will be a thing of the past in an event that is rich in matchplay history and intriguing results.

These series have certainly produced interesting one-on-one challenges and the proposed modifications to the format – apparently justified on the basis of the event being modernised by a ‘stroke play’ format, therefore being able to attract a quality layout whilst at the same time implementing cost savings – will result in such challenges becoming a thing of the past.

In the opening round, Cameron Smith’s 3&2 victory over world number two Brady Watt was a classic battle between arguably our two best world ranked amateurs.

The second round had Nathan Holman securing a 3&2 win over Watt, with Brett Drewitt squaring his match against Smith.

These contests produced sizzling golf – with Smith in his match against Drewitt making birdies on the last two holes to secure a half against Drewitt, who is arguably our best matchplay exponent.

Drewitt’s winning run however came to an end in the third round when Watt won their match 4&3, with Tasmania’s Nathan Gatehouse then securing an impressive 2-up win over Holman.

Jordan Zunic, a player to follow, defeated Australian Master of the Amateurs champion Viraat Badhwar ,3&2, before disposing of Geoff Drakeford, 3&2 in the fourth round.

The fourth round then would prove a turning point for NSW with Drewitt securing an impressive a 1-up victory over Holman before the NSW team went onto claim a 6½ to ½ win over arch rivals Victoria. The win closed the gap for over Queensland in the matches won after Queensland half their match with Tasmania.

Today’s last round before the final produced some stellar golf with Callan O’Reilly playing number three for New South Wales remaining undefeated in these series, as is Ricky Kato playing at number six.

In the battle of the heavyweights, Queensland and Victoria halved their contest with Ryan Ruffles from Victoria securing a 5&4 win over Simon Vitakangas, whilst Geoff Drakeford squared his match with Taylor McDonald.