Tony Finau secured a four stroke win over fellow American Tyson Alexander at the Houston Open on the PGA Tour.

It was Finau’s third PGA Tour title this season and he dominated the field to finish at 16-under-par. The 33-year-old was one of only two players in the field, who posted a score in the 60s in every round. He was at five-under-par 65 in round one, eight-under-par 62 in round two, two-under-par 68 in round three, and one-under-par 69 in round four.

The other player to accomplish the feat was Jason Day who finished in a share of 16th position after posting three consecutive rounds of 69 and a final round 68. Day was the lone Australian in the field this week.

Finau was obviously pleased with his game and the manner in which he was able to close out the victory.

“Overall this was a special week,” said Finau. “You know, I won this golf tournament from start to finish. I don’t know if I’ve done that in my career, maybe at Rocket Mortgage, but to have played that well for four straight days, that’s what it’s all about and all the hard work is starting to pay off, which is fun.”

Finau moves to No.12 in the World Rankings. He previously won the 2022 3M Open in Blaine, Minnesota, and the 2022 Rocket Mortgage Classic in Detroit, Michigan. He is now a five-time winner on the PGA Tour, three of which have come from his last seven tournaments.

“I’ve always had belief, but the confidence when you win is contagious,” said Finau. “I’ve always been a very hopeful person. I work extremely hard, and now I’m starting to bear the fruits of that labor, of all that work.” 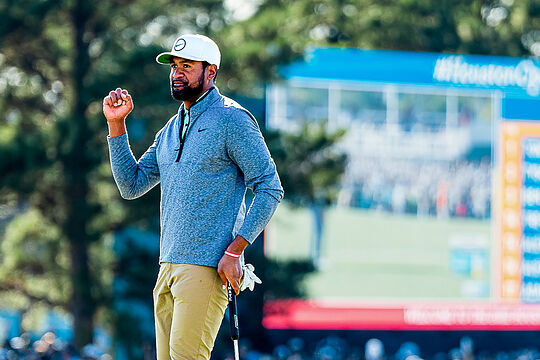 Including that Mexico Open, Finau has seven top-five finishes in 15 starts, including three of his five career PGA Tour victories. His fine run of form will make for an exciting 2023 season.

Finau has been a solid performer at major championships in the past with 10 top-10s in 26 starts, yet he has yet to move the needle on a Sunday.

Tyson Alexander closed with a 66 to take outright second place, a stroke ahead of England’s Ben Taylor. Alexander is in his rookie year on the PGA Tour and is a two time winner on the Korn Ferry Tour having last won in 2022 at the Veritex Bank Championship.