It should have been back to back Aussie wins on the PGA Tour but Cameron Smith, like Adam Scott, fell agonisingly short of pulling off a miracle win at the Northern Trust.

Scott came into last week’s Wyndham Championship in a share of 41st before weekend rounds of 64 and 65 earned him a spot in a six-way playoff. While Smith took a different route this week pulling off an 11-under 60 in the third round and a 67 this morning to move from 25th on Friday into two-man playoff with Tony Finau, who carded a 65 for the lowest round of the final day.

Ultimately it wasn’t meant to be. Smith quickly put an end to his campaign, putting his teeshot on the first playoff hole out of bounds and had to settle for second place, equalling his finish at the Masters earlier this year.

Despite the loss, Smith’s play last week shows he is coming into the pointy end of the season in some of the best form of his career.

“We’re here for the FedExCup. Luckily for us there’s always next week, and we’ve got two events left to try to make another move, so looking forward to it,” said Smith, who was forced to endure a 24-hour storm delay before playing his final round alongside co-leader Jon Rahm.

“My driver has cost me a few tournaments this year. That makes mean more determined to try and figure it out before the end of the year.”

Someone who knows all about near-misses is Tony Finau. He had gone over five years and 143 starts since his last win at the Puerto Rico Open and had racked up eight top-10 finishes including two runner-up places this season and eight second PGA Tour placings in total since 2018.

“I’ve lost in playoffs, taken second, third in, major championships. I’ve persevered and that’s the biggest key is I haven’t given up on myself and on my team.” 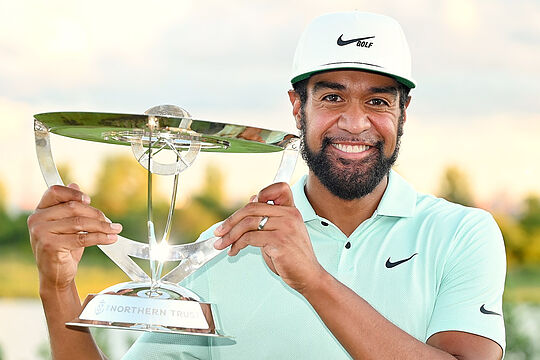 “I’m a lot better player and I feel like it’s been a long time coming but I also feel like you have to earn everything out here. Nothing’s given to you and I was able to earn this win, and you know, hopefully the future continues to be bright,” said Finau.

World No.1 Rahm bogeyed two of his final four holes to miss the playoff by two shots in his first tournament back since the Open Championship in mid-July.

Finau now moves from 23rd to first place in the FedExCup standings while Rahm jumps from 5th to second and Smith from 16th to third place.

With Collin Morikawa out of action last week due to a back injury, the Open Championship winner fell from 1st to 6th place.

Cam Davis was the next best of the Australians in a share of 31st and will live to fight another day in 36th place in the FedExCup as will Marc Leishman (T47) who now sits in 35th.

Both Adam Scott and Jason Day missed the cut and won’t be lining up at this week’s BMW Championship. Scott breaks a FedExCup streak dating back to its inception in 2007.

Matt Jones was the last of the Aussies and is safe again for another week in 42nd place but will need a solid finish to make the final top-30 to play at East Lake.