Tony Finau has secured two wins in seven days on the PGA Tour following his victory on Sunday at the Rocket Mortgage Classic seeing his winnings leap by nearly US$3million.

A week earlier Finau won the 3M Open and has moved him to over US$30million for his career.

Finau also becomes the first player since Brendon Todd to win PGA Tour titles in successive weeks, moving him to seventh in the FedExCup standings. The 32-year-old mixed six birdies with a lone bogey on his way to a 5-under 67 at Detroit Golf Club to finish five ahead of Patrick Cantlay, Cameron Young and fellow overnight co-leader Taylor Pendrith.

“One of my goals would be to be a multiple winner on Tour this season, to be able to accomplish that is amazing,” said Finau, whose 26-under total was a tournament record.

“I write down goals before every season and I was able to peek at them overnight, and one of them was to be a multiple (tournament) winner this season, so I’m wrapped with this result. A win can change your life, so I guess when you look at mine, two weeks, back-to-back weeks, have now changed my life, and it’s a great feeling.”

Known for his distance, Finau ranked third in driving accuracy, finding 46 of 56 fairways, which led to hitting 66 of 72 greens. The few times he didn’t hit a green in regulation, he was a perfect 6-for-6 avoiding a bogey. With such results, it’s little wonder he dominated the tournament especially when Finau was the best putter the entire week, needing just 114 putts, an average of 1.58 per hole. 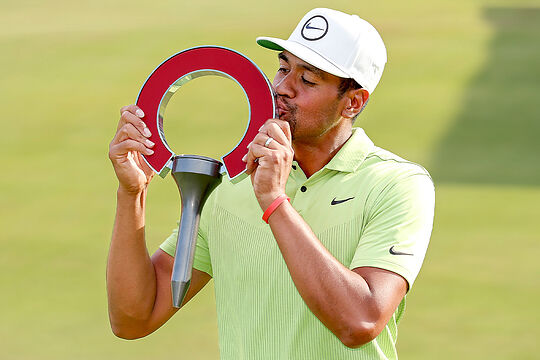 Scott was looking well in contention following rounds of 69 and 66 before a disappointing 78 on Saturday put an end to his hopes this week.

Next up on the PGA Tour schedule is the $7,300,000 Wyndham Championship and marks the last of the regular season events before the FedExCup Playoffs get underway with the FedEx St. Jude Championship on August 11.