He won fans all over the world with his courage – and class.

And the world grimaced in pain every time they replayed the video of Tony Finau running backwards down the fairway as he celebrated after making a hole-in-one at the Wednesday Par Three contest the day before the US Masters. 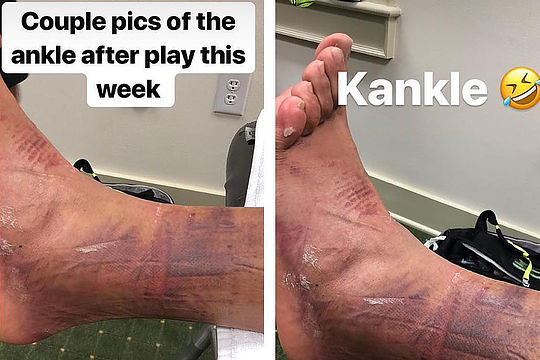 How the 28-year-old American was able to make the tournament, shoot an incredible first-round 68 and still be there at the weekend, was nothing short of incredible.

Finau dislocated his left ankle and was in doubt to even take his place in the field.

But the Masters rookie made it to the tee, thanks to some medicine and willpower, and his round of 68 was followed by 74-73 and an even-more-impressive final-round 66 to finish in a tie for 10th.

That final round, incidentally, included six successive birdies on the back nine…on a Sunday!

There were reports that depicted details of Finau’s efforts to keep weight off his front leg during the swing.

That in itself was a mighty challenge at Augusta National, a course famous for its slopes and hanging lies where only the tees are considered to be flat.

Now Finau has won a few more fans by posting images of his swollen ankle on Instagram.

Additionally, he showed what his ankle, hobbled on for 72 holes, looked like Sunday night in an Instagram story.

Finau’s posted commented that it was a week he would never forget because it included, in his own words:

“I believe we find out most about who we are through adversity,” he said.  “Thanks for the well wishes all week!”