American Tony Finau fired a 4-under-par 67 to win the 3M Open by three strokes on Sunday, coming from a five-stroke deficit with 11 holes left, as Scott Piercy faltered down the closing holes at TPC Twin Cities.

The win was Finau’s third on the PGA Tour and moves him from 30th to 17th in the FedExCup race. He entered the week ranked 17th in the world and moves into 16th place.

Finau finished at 17-under with Sungjae Im and Emiliano Grillo in a share of second place on 14-under. Piercy followed his tournament record 54-hole score with a disappointing 76 to tie for fourth and four strokes back.

Piercy bogeyed four of six holes before a triple-bogey implosion on the 14th which effectively opened the door for Finau to take the title.

“I expected myself to contend and win again this year, so to be able to do it this late in the season when you’re running out of tournaments and you put that type of expectation on yourself, it’s so satisfying,” said Finau.

Finau’s pathway to the main arena has been a mixture of ups and downs, spending several years on mini-tours before earning Korn Ferry Tour status in 2014, earning his PGA Tour card that season and keeping it ever since. His other two PGA Tour wins came at the 2016 Puerto Rico Open and 2021 The Northern Trust.

Finau’s PGA Tour has been plagued by runner-up finishes with the 32-year-old racking up ten second place finishes over the past five seasons alone. 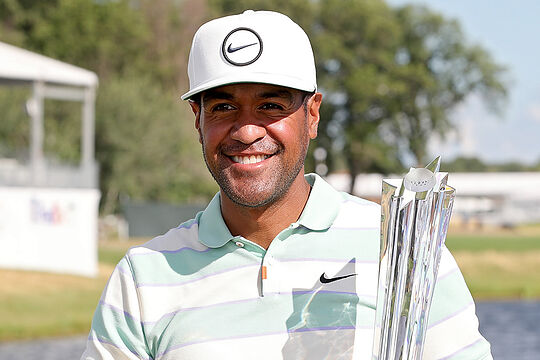 Sunday’s victory was also financially rewarding for Finau increasing his earnings by more than 50% this season with the US$1.35 million winner’s cheque. He had entered the tournament with US$2.7 million from 20 starts, among them two runner-up finishes in both Canada and Mexico this season.

Sunday’s success for Finau really came down to making the critical putts when they were needed.

“My game is as good as it’s ever been in really all aspects. I’ve got a lot of good and some bad breaks this week. That’s what makes the game so great, so satisfying, when you get the job done because you know that it doesn’t happen very often, but this one’s very special.”

Cam Davis finished the best of the Australians in a share of 16th position at 7-under-par, a final day 69 moving him eight places up the leaderboard.

Cameron Percy shared 26th position, with Aaron Baddeley in a share of 49th position, then Jason Day in a tie for 64th.

Greg Chalmers also made the weekend to finish in a share of 70th.