Chambers Bay, Washington: This year’s U.S. Open venue, Chambers Bay, did not disappoint in terms of a reputation as a ‘big’ golf course when we arrived at the course for Tuesday’s practice rounds.

Big hardly does it justice. From the shuttle bus coming in, it strikes you immediately how enormous the site is, built on what must have been the most scenically beautiful gravel and sand mine the world has seen. 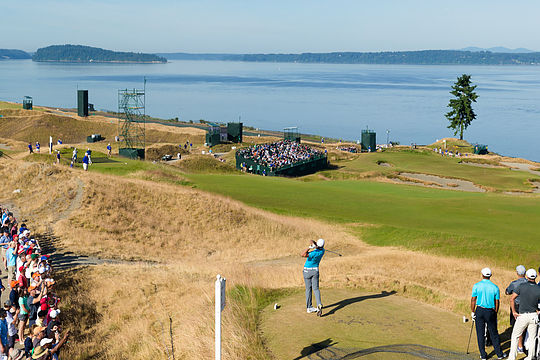 Jason Day tees off with Tiger Woods and Dustin Johnson during their practice round at Chambers Bay (Credit: USGA/Darren Carroll)

They cite the elevation changes at Chambers Bay as the most dramatic of any of the U.S. Open venues. While I haven’t seen them all, when you measure elevation in terms of ‘storeys’ as opposed to yards, you know you have elevation!

I’ve seen less steep hills at the northern end of the course with gondolas snaking up them, which points to the significance of the challenge itself when the championship commences on Thursday.

Leaving aside the design features and course setup for the time being, the players and caddies won’t be the only people tested to their physical and emotional limits this week. It’s going to be tough outside the ropes for spectators too but from the right vantage points, these are some of the more spectacular scenes you could find on a golf course anywhere.

The officials charged with maintaining Greens in Regulation statistics with any accuracy might also be reaching for a little pain relief before the week is out too.

On most of the holes with full fescue turf from tee to green, it’s almost impossible to discern green surfaces from surrounds and fairways.

With drop off areas beside greens so huge in places, players could using the putter from 50 yards away if they miss in the wrong spots – watch for shots pulled left of the first green on the telecast and you’ll get an early taste of things to come.

Most of the Australians were in practice rounds action on Tuesday in flawless conditions with the sun baking the exposed course to a British Open-shade of brown and light green.

It’s almost eerie to think that you’re standing on a U.S. Open layout, when you contrast this course with all the more lush, tree-lined layouts we’ve seen in the past.

I was asked by a local volunteer if we have golf courses anything like this in Australia. Safe to say there aren’t many that compare to this anywhere.

A U.S. Open Championship with a difference, this most certainly will be.