First major of the year kicks off for LPGA

The California desert plays host to the LPGA’s first major of the year, the 42nd Kraft Nabisco Championship, at the iconic Mission Hills Dinah Shore Tournament Course in Rancho Mirage this week. 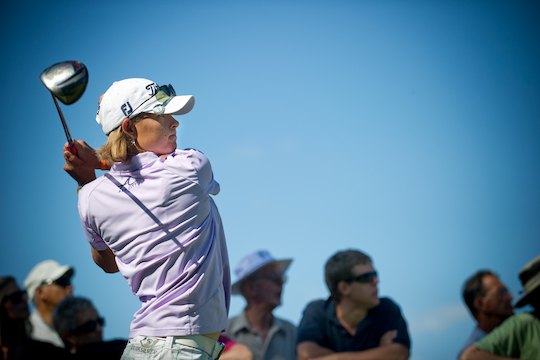 Yoo sunk a 20-foot birdie putt on the 1st playoff hole against countryman I.K. Kim after the two had tied at 9-under in regulation play, however the finale will be long remembered for Kim missing one of the shortest putts to win a major in golf history.

Kim’s horseshoed out a putt estimated to be no more than a foot long on the final hole in regulation play, which she is sure to have re-played and re-hashed this week as she returns to Mission Hills for a shot at redemption.

Kim displayed fine form in last week’s Kia Classic, albeit that putting woes befell her again as she tried to close out the event, three putting the final hole and first playoff hole to lose to Spain’s Beatriz Recari.

Newly crowned World No. 1 Stacy Lewis, the 2011 champion, will be favoured to win and an exciting finale will be assured again thanks to the course’s classic ‘risk reward’ finishing hole, allowing contenders to literally sink or swim as they chase glory on the par-five 18th.

2-time champion Karrie Webb famously holed a wedge for eagle for a spectacular win in 2006 after choosing to lay up short of the water fronting the green with her second shot, followed by the traditional winner’s jump into the lake following the presentation ceremony.

Australians Katherine Hull-Kirk, Sarah Jane Smith and Lindsey Wright join Webb in the field, while the prodigiously talented Kiwi Lydia Ko will be a realistic chance to become the first amateur winner in the event’s history if she can repeat the form she displayed in winning the Canadian Open last year.

In an interesting aside, former Australian Open champion Jessica Korda won’t be the only ’Daughter of a famous tennis Dad’ in the field this week after the tournament afforded a sponsors invitation to 21-year old Isabelle Lendl.

Lendl, daughter of former World No. 1 Ivan, is a member of the University of Florida Gators golf team and is carving out a fine amateur career.

This will be her first tournament playing against the professionals on the LPGA Tour.