Pennant Hills has won their first Division One grade flag in impressive style, blitzing through the season undefeated.

Led by 22-year-old Lauren Hibbert at number one, Pennant Hills were rarely threatened throughout, their closest match a 4 ½ to 2 ½ victory over Division one newcomers, Concord Golf Club. 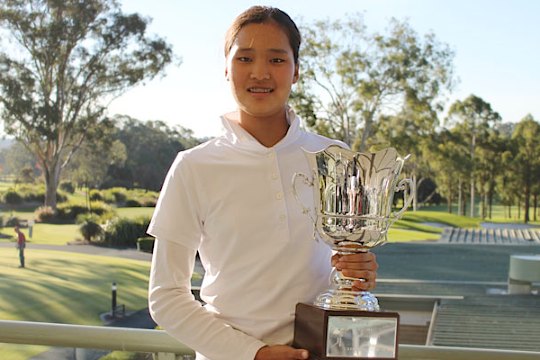 Ladies Captain, Judy Dean was full of praise for her team, considering they lost their number two and three players throughout the season.

“It was pivotal that we beat the Australian in the first round because they won it last year and we knew that our number two, Ashley Cramond was heading back to the UK after the first round,” Dean said.

“We were still confident that we would do well but things were getting more anxious. The girls just kept playing very well all year.

“And then for our last match we lost Rei Nakatani, so our team dug deep.”

Hibbert was undefeated winning five matches and squaring her final game against Concord’s Shelly Shin, while Belmont’s Tess Macdonald had four wins and a half and Aliza Huff also played well losing just the one battle.

“They would be the three that were absolute standouts for us, for sure,” Dean said.

“So we are now looking forward to defending next year and hopefully we will have the same team, but we are not sure about Lauren’s return.”

Concord, who were promoted from Division Two last year, had an outstanding year in the top grade, finishing runner up.

While the Division One Flag was decided before the final round, in Division two it went right down to the wire.

Avondale hosted the final day so had to sit out and watch events unfold. They were leading the division but knew Castle Hill, Monash or Pymble stood a chance of winning the pennant with a last round victory.

While Monash defeated Royal Sydney 4 ½ to 2 ½ , it was still anyone’s title as Castle Hill and Pymble battled it out. With three matches settled on the 18th hole it was Castle Hill who prevailed 4 to 3.

Killara went into the final round leading in Division Three over Cumberland and Wakehurst but the final day proved to be the closest of all divisions. Cumberland managed a tight 4/3 victory over Killara but so too did Wakehurst over North Ryde.

All three clubs finished the division equal on 4 ½ wins so the final result came down to the number of individual wins. Wakehurst took the title comfortably courtesy of two 7/0 victories while Killara just pipped Cumberland into second place.

Bayview proved too strong in Division Four and comfortably took out their title with Elanora coming in second. It was a very dominant performance by Bayview who lost only 9 ½ matches over the six weeks of the competition.

It was a very different story in Division Five when Camden Lakeside scraped home by one point over Randwick on the final day. Camden won the Pennant after they easily accounted for Woolaware 4-1 while Randwick were unable to overcome the home side Asquith.

Moore Park, who has always been strong in the Men’s Pennant, now has a Ladies Pennant to add to their trophy cabinet when their team defeated Long Reef in Division Six. The two teams battled it out on the final day for the title but it was Moore Park who proved too strong winning 4 -1.

They will now move up to Division Five for 2013.