England’s Ross Fisher made amends for a play off lost four months ago on one side of the Indian Ocean with a three shot victory at the Tshwane Open.

Last October Fisher lost a play-off to Australian-based Jin Jeong in the Perth International in Australia. 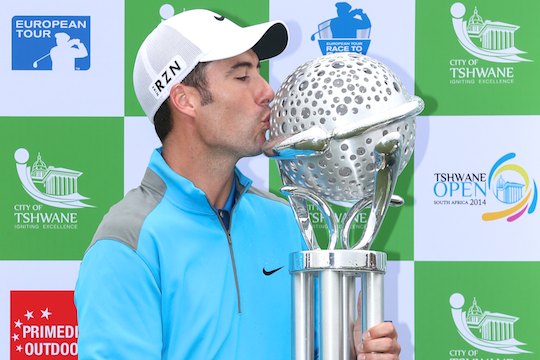 However Fisher ended a more than three year winless drought despite a final round fightback by Northern Ireland’s Michael Hoey to capture a fifth European Tour success and a first since the 2010 Irish Open at Killarney,

Having started the day five shots clear, Hoey reduced the deficit to just one after 11 holes, but then double bogeyed the 12th after finding water with his approach.

Fisher then eagled the long 15th from 25 feet to extinguish any realistic hopes the chasing pack may have harboured, as he secured his fifth European Tour title and first since 2010 with a closing round of 70.

That gave him a 20 under par winning total, three clear of Hoey and South African Danie Van Tonder, with Spanish Qualifying School winner Carlos Del Moral a shot further back.

“I’m thrilled to get over the line,” Fisher said.

“It was a testing day with the weather conditions and playing with Mike he put up a great challenge for me.

“I set a target of trying to go out there and shoot in the 60s and almost managed to do it. I had a little mishap on the last but I’m just glad to be standing here talking to you as champion.”

Fisher admitted his eagle on the 15th had helped to settle any potential nerves.

“There have been a couple of eagles, but that was a big putt there.”

“I know I was only a couple ahead. To hit a nice shot there and have a good look at three and to see it drop – I think I went four shots clear with only three to play I knew I could coast in.

“There was a little wobble on a few of those holes and I managed to make a couple of good par saves on 16 and 17.”