Fitzpatrick, 22 collected just the third event of his pro career in what proved to be a two-shot turnaround in his favour at the last, when he holed a four-foot birdie while fellow Englishman Tyrrell Hatton, who had been leading by a shot heading to the 18th tee, proceeded to bogey the hole. 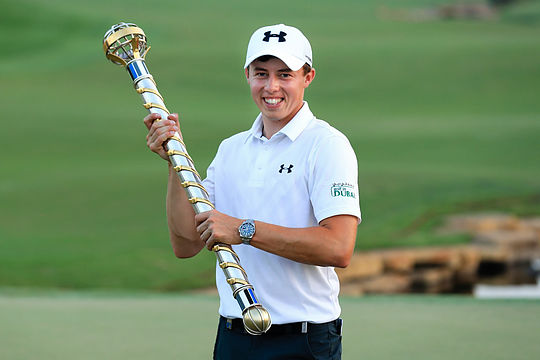 Fitzpatrick posted a final round 67 for a 17-under par victory tally and one few than Hatton who carded a 68 in the Greg Norman designed Earth Course.

The 22-year-old becomes the youngest Englishman ever to win three European Tour titles beating out six-time major winner Nick Faldo, who was roughly six months older when he won his third European Tour event at the 1980 Sun Alliance PGA Championship.

“It’s a great way to end the season,” he said. “This is my best result of my career. There isn’t anything better than that, you know, so yeah, it’s been a very, very good week.”

“It means the world. To win one of these Final Series events is really special, and this one in particular – obviously the last tournament of the year. For me to win on the final week of the year is special.”

“Four footers aren’t normally what you want for the win but to finish it off like that makes it a lot sweeter.”

Swede Henrik Stenson posted a stunning 65 on Sunday to clinch his second Race to Dubai title, while Rory McIlroy also shot a closing 65 to get to 12 under.

Marcus Fraser was the only other Australian in the field this week but second and third rounds of 74 and 78 saw the Olympian finish in equal 52nd place.

While Sweden’s Henrik Stenson didn’t win this week he performed well enough to clinch his second Race to Dubai title and end 2016 as the European No. 1.

The Open champion closed his 16th European Tour season with a seven under par 65 in the DP World Tour Championship, bringing the curtain down on a year in which he became the first Swede to win a major with his triumph at Royal Troon in July and also claimed an Olympic silver medal.

Along with victory at Royal Troon, Stenson won the BMW International Open in Germany and finished runner-up another three times this season.