Fitzpatrick holds off Zalatoris in wild US Open win

In 2013 Matt Fitzpatrick walked off The Country Club a winner of the US Amateur and now almost a decade later the Englishman has won the US Open at the very same course with a heart-stopping one-shot victory over Will Zalatoris this morning.

Fitzpatrick joins Jack Nicklaus to become just the second man to win a US Amateur and US Open at the same course. And thanks to a record $17.5 million purse, Fitzpatrick will take home $3.15 million in prize money and move to No. 10 in the FedExCup standings with his first PGA Tour win.

“The feeling’s out of this world,” said Fitzpatrick, who closed with a 68 for his 6-under total. “It is so cliche, but it’s the stuff you dream of as a kid. I can retire a happy man tomorrow.”

“Any time you’re sharing a record with Jack Nicklaus, it’s unbelievable. So for me to have that as well is incredible. He called me up down there just at the presentation to congratulate me. Coming from someone like that, it means the world.”

It was a wild final round with the lead ebbing and flowing across the day with the likes of Rory McIlroy (69), Hideki Matsuyama (65) and Scottie Scheffler (67) all putting their hands up along the way before Fitzpatrick and Zalatoris headed to the final hole separated by just one stroke.

Earlier, World No.1 Scheffler had signalled his intentions with a stellar opening nine of 4-under 31 before dropping two quick shots after the turn to leave himself with an uphill battle on the way in. The Masters champ managed to offer a glimmer of hope with a birdie at the 17th moving him to 5-under before a par at the 18th left the 25-year-old one behind Fitzpatrick in a share of second.

Fitzpatrick didn’t make it easy on himself either. After putting his final teeshot of the tournament into a fairway bunker, the door opened slightly for Zalatoris. However, under enormous pressure, Fitzpatrick pulled off the type of shot that only a true champion can and found the green. Meanwhile, Zalatoris was able to match the Englishman and left himself with just over four metres to make a birdie putt and force an unlikely playoff. 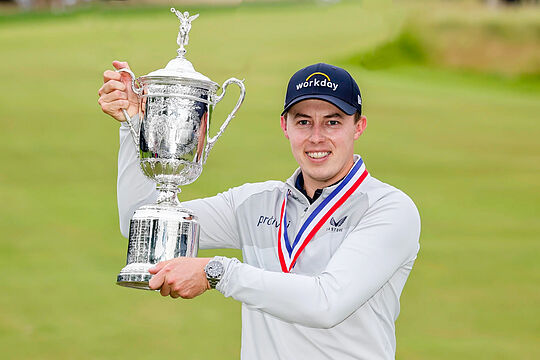 Fitzpatrick played first and found the perfect length for an easy tap-in par. Zalatoris then stepped up and with the eyes of the world upon him shaved the left-hand side of the hole to hand the title to Fitzpatrick and record his third runner-up finish at a major in the past two years.

“It stings, obviously,” said Zalatoris. “To have three runner-ups so far in my career in [nine] majors, but I’ll keep knocking on that door. We’re obviously doing the right things. I’d pay a lot of money for about an inch and a half, and I’d probably be a three-time major champion at this point.”

It was an incredible finish to a tournament that was headlined by the brutal rough that dominates the layout in Brookline. But it’s a US Open and that is what we tune in to see – the world’s best players being forced to their knees by some of the toughest setups in the game. There’s little wonder that Tiger Woods chose to sit this one out.

Two players who managed to avoid the brutality in the final round were Marc Leishman and Adam Scott. Both recording rounds of 68 to share 14th place on 2-over to be the best placed of the Australians.

Western Australia’s Min Woo Lee impressed on debut to card a 5-over total for a share of 27th with Todd Sinnott another shot back in 31st.

The final major of the year is now just under a month away, the 150th Open Championship teeing off on July 14 at St Andrews.