Fitzpatrick fended-off all that was thrown at him first in racing clear of his rivals with four birdies in his opening four holes and then went to five-under with a birdie on seven before playing his closing 11 holes in one-over in a round of 68 to win by a shot at 15-under par.

The DP World victory is the Englishman’s sixth win of his career since a debut triumph at the 2015 British Masters and his last in 2018 in successfully defending his Omega European Masters title.

“The start I got off to, four birdies in the first four, five under through seven, it’s a dream start,” he said. “Fortunately I managed to pull away from that and really sort of create some distance.”

“It was just obviously a bit of a grind on the back nine. For me it was just about finishing one hole at a time and just getting through it. I managed to do that and finished well.” 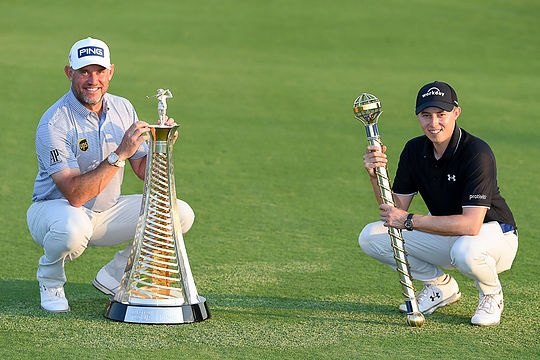 “I had no idea about the Race to Dubai because I knew where I started the week at 16, a lot needed to go my way. When I saw Lee at second, it did enter my head briefly going to 18, even if I win it’s probably not going to be enough, anyway. I just wanted to win a lot this week.”

“I’m just trying to improve every year. I really set high standards of myself and I am honestly very hard on myself and my team will all tell you the same thing. To be here at 26, and I don’t know what this win has taken me to in the world, potentially my highest year-end ranking, I’m very, very happy.”

What’s In The Bag: Matt Fitzpatrick

The 26-year-old laughed saying: “The prize money is a very nice bonus of the job. I’m more bothered about these (raising the DP World trophy) so I’ll just let it sink in the next few days, and I’ll have a think. Maybe I’ll buy myself something nice, who knows.”

Westwood faced a clearly very anxious wait following his last day score of third straight round of 68 for an eventual 14-under par tally for a third European No. 1 crown in 20-years.

He won a first in 2000, a second in 2009 and remarkably now a third in 2020 and was asked if he could speak about each victory coming, as they did, at different times in his career.

What’s In The Bag: Lee Westwood

“They have all been very different. I guess 2000, sort of I was winning a lot, but I was still like up-and-coming. It was only my seventh year on Tour 2009, I was honing in on the best player in the world spot, and I needed to win here to win The Race to Dubai, and I managed to do that,” he said.

“And then this one, I’m kind of the more mature player on the European Tour now. It wasn’t something I set out to do at the start of the year, but it shows the consistency I’ve shown.”

“The most satisfying thing is doing it under pressure when it matters. You know, coming out this week knowing nothing but a win or second will do, and pulling it off.”

Westwood captured his third European Tour No.1 crown by just 17.8 points over Fitzpatrick with Westwood ending the year with 3,128 points and Fitzpatrick on 3,110.2.

Patrick Reed finished agonisingly close to an historic US win on 3,103.7 points to secure third place but will be rueing two late dropped shots at 16 and 17 that would have put him in a playoff with Fitzpatrick.

Norwegian sensation Viktor Hovland, who won last week’s Mayakoba Classic in Mexico, shared third place at 13-under par alongside the Texan following a final round 69.

No Australians played in the field despite the likes of Adam Scott, Lucas Herbert and Min Woo Lee qualifying for the season-ending tournament.