Lee, 23, fired a closing round of 70 to move up three places into a share of second place alongside Sweden’s Sebastian Soderberg at 3-under-par. Lee took advantage of the three par fives while also adding gains at the first and seventh, but bogeys on the second, tenth, 12th and 13th hurt his chances of pressing Fitzpatrick.

“Tied 2nd place. Gave it a good crack this week. Valderrama will always be one of my favourite courses. Thank you for the two weeks, Spain. A big thank you to the fans who encouraged me this week, you were incredible. I’ll be back,” posted Lee on social media.

The result adds to Lee’s earlier win in July at the Scottish Open and moves his world ranking to a career high of 55th and placing him within reach of the all-important top-50 to qualify for next year’s majors.

Fitzpatrick fired an impressive final round 69 to win his seventh European Tour title. He becomes the first English winner of this event and moves up to 5th place on the Race to Dubai Rankings.

“It’s on the bucket list to win round Valderrama with the history that it has,” said Fitzpatrick. “To do it bogey free on Sunday as well is extra special. I’m delighted.” 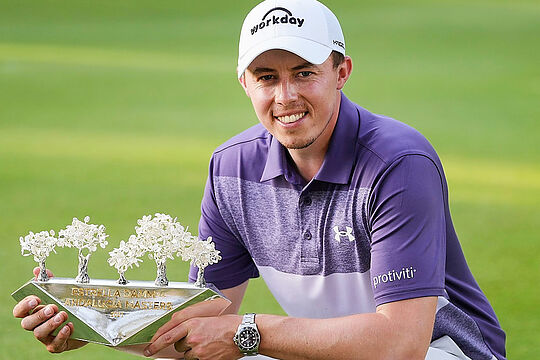 “It’s amazing, particularly the way I did It – very patient all day, didn’t try to press anything, stuck to our targets and managed to hole the putts at the end. I’m delighted with the win.”

Fitzpatrick won his first title in his rookie season in 2015 and has won every year since, except in 2019 when he had four runner-up finishes, and finished in the top-25 of the Race to Dubai every year.

Only 14 players finished under par on the tough Valderrama course. Top-ranked Jon Rahm missed the cut, finishing in a share of 99th place. Defending champion John Catlin was among those another shot back. The American closed with a 4-under 67 for one of the best rounds of the day.

Jason Scrivener was the only other Aussie behind Lee to make the weekend finishing in a share of 58th position.

This week the tour moves to the final leg of the Spain series with the Mallorca Golf Open with three tournaments left in the regular season before the Dubai finale on 18th November.