Five Aussies line up to battle brutal US Open

Erin Hills, located 35 miles northwest of Milwaukee in the Kettle Moraine region, is a public facility that opened for play in 2006 and will host the US Open for the first time when the championship gets underway early on Friday morning (AEST).

Having hosted two earlier USGA championships including the 2011 US Amateur, when Kelly Kraft defeated Patrick Cantlay, 2 up, in the 36-hole final and with a slope rating of 147 off the tips, it’s a layout demanding precision from the tee and excellent iron play to post a number. 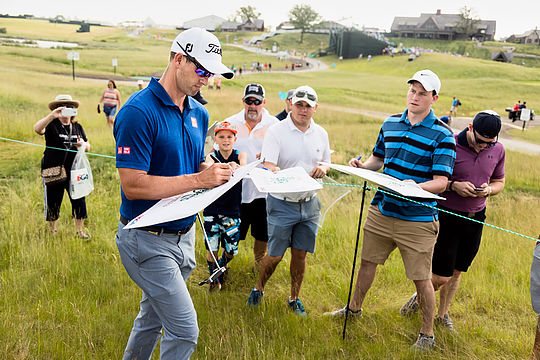 Adam Scott signs autographs during a practice round at Erin Hills (Credit: USGA)

Traits which the US Open championship is renowned for as the game’s best will confront a layout that can actually demand the full arsenal of clubs due to its length and punishing rough and bunkers.

The exact yardage will be provided on a daily basis for each of the four championship rounds and can be stretched to 7078 metres.

The USGA have indicated that the setup will depend on weather/wind conditions and match certain teeing ground with certain hole locations, but it will play to a par of 72.

The longest US Open course to play was Chambers Bay in 2015 at 7036 metres, so potentially this US Open might top that mark.

Five Australians will contest these championships.

Nick Flanagan, the 2003 US Amateur champion, is among the 21 US Open qualifiers who advanced through both local and sectional qualifying. Flanagan is playing in his second US Open.

The remaining Australian contingent includes Jason Day, the No. 2-ranked player in the world, who has four top-5 finishes including being runner-up in 2011 and 2013.

Day has an afternoon opening tee time alongside Justin Rose and Rory Mcllroy.

Also teeing it up from Down Under will be Marc Leishman, Wade Ormsby and Masters champion Adam Scott.

Scott will join Day in teeing it up in the afternoon session with Bubba Watson and Sergio Garcia.

The starting field of 156 golfers will be cut after 36 holes to the low 60 scorers (and ties).

Last year Dustin Johnson carded a final-round 69 for a 72-hole score of 4-under total to win by three strokes over third-round leader Shane Lowry, Jim Furyk and Scott Piercy.

Johnson, a US Open runner-up the previous year following a three-putt on the 72nd green at Chambers Bay, overcame that memory and the distraction of a potential Rules violation early in the final round to take the major.

Defending the US Open crown appears to be a huge task. Since 1991, just five champions have finished better than 15th in their title defence with Tiger Woods tied for sixth in 2009 after capturing his third Open title at Torrey Pines the previous year. Woods also tied for 12th in 2001 after winning his first US Open at Pebble Beach.

Among the benefits enjoyed by the US Open winner are a US Open exemption for the next 10 years, an invitation to the next five Masters Tournaments as well as a five year exemption to the Open Championship, PGA Championship and the Players Championship, not to mention exempt status on the PGA Tour for five years.