Former PGA Tour player, Nick Flanagan, has shown he still has what it takes to win after claiming a narrow playoff victory at the inaugural Cathedral Invitational.

The new event took advantage of the fields that were in town for the men’s and women’s Australian Opens and attracted the likes of Karrie Webb, Adam Scott and Marc Leishman to the Cathedral Lodge & Golf Club two-hours north-east of Melbourne. 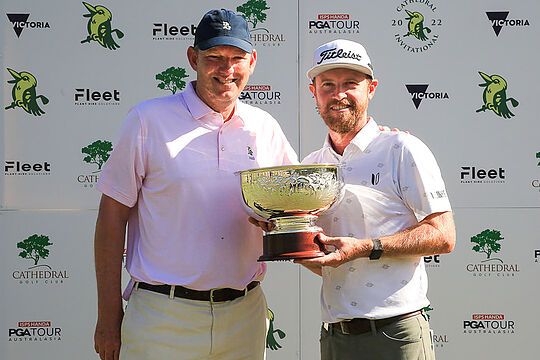 In fact, it was Webb who almost stole the show. The 47-year-old enjoyed a two-shot lead in the 36-hole event before a double-bogey and bogey at the 17th and 18th holes put an end to her chances.

Attention then turned to Nick Flanagan and Scott Arnold, who finished locked up on 6-under. With $100,000 prizemoney on the line, the pair headed to the first playoff hole where Flanagan’s par was enough to clinch the cash.

“I wanted to come back and I pretty much just said we’ll see what happens and if it goes great, great, and if it doesn’t then we’ll sit down over Christmas and decide what’s next,” said Flanagan, who now makes his home in Texas.

“With two kids now every cent counts. For me to keep chasing these tournaments and spending the money to come over, if you don’t perform it goes really quick and your priorities change.”

“This will definitely give me a little bit of breathing room to be able to come back and play a little bit next year, the events at the beginning of the year, and hopefully bring the family with me which we haven’t been able to do with how expensive it can be.”

Webb shared third place on 5-under with Grace Kim, who recently secured her first LPGA Tour card, while Marc Leishman was another shot back on 4-under in outright fifth place.