Fijian Sam Lee and New South Welshman Nick Flanagan have made a fast start in their pursuit of 2018 Tour cards.

Teeing it up at the final stage of ISPS HANDA PGA Tour of Australasia Qualifying School presented by Cobra Puma Golf at Moonah Links Golf Resort, Lee and Flanagan each fired 8-under 64. 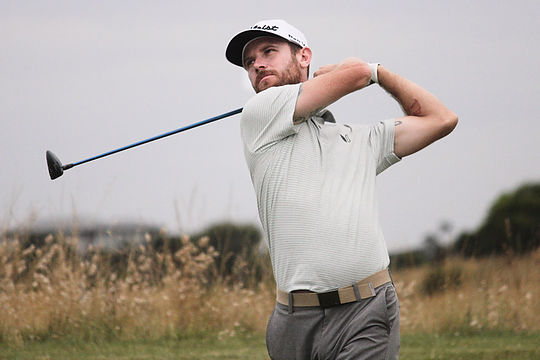 Having his first look at the Open course this week, Lee was pleased with his round that featured an eagle, five birdies and just one bogey.

“I was actually a bit anxious at the start of the day because I only made two birdies in the three practice rounds,” said Lee, who is aiming to gain status on Tour for the first time since 2015.

“So I knew this wasn’t a birdie course; that par would be a good score but I just had a lot of birdie opportunities that I made the most of.”

Flanagan finished his round in a flurry recording five birdies in his final six holes.

“I played really well, I got most of my holes in before the wind picked up which was handy and then had a good finish when the breeze did start to get up,” said Flanagan.

“I hit it really good to the start of the day, I had a bunch of short putts for birdie but other than that I was just really solid tee to green.

“I only really made one big mistake and managed to make a 20 footer for bogey on that hole (par-4 11th) and that was a big momentum keeper in the end.”

Based in the U.S. and having focused his attention on the Web.com Tour whilst battling injuries over the past few years the former U.S. Amateur Champion has decided to take a different approach in 2018.

“I am living in Texas and still have some status on the Web Tour but I wanted to come back and get into some Australian events if I can.”

“If I have a good week here and get into some tournaments at the start early in the year it is a good chance to just keep playing tournament golf, which I haven’t done a lot of the past three years due to injury,” added Flanagan.

“It is a big goal for me to play a few more events in Australia, play the big ones again. The Order of Merit out here has a few big perks and I have never really put my effort into that because I have always been in the U.S. but that hasn’t been working out so I thought I would change it up.”

Just a shot off the leading duo is Anthony Marchesani, who after starting on the 10th tee, was 8-under after 15 holes before making two bogeys on the way into the clubhouse.

The 25-year-old Victorian is looking to follow in the footsteps of his brother James Marchesani who recorded five top-10 results on the ISPS HANDA PGA Tour of Australasia and a win at the Clearwater Bay Open, the only event on the PGA TOUR-China this year.

New South Welshman Jordan Mullaney fired 5-under 67 to be outright fourth while a shot further back and rounding out the top-5 are Austin Bautista, Tim Stewart, Neven Basic, Matthew Lisk, Aaron Townsend and Cameron John.