Fleetwood, who also celebrated his 27th birthday on Friday, produced a blistering a closing 65 to win by two shots with a 22-under-par victory tally in his first regular event since being crowned European Tour No. 1. 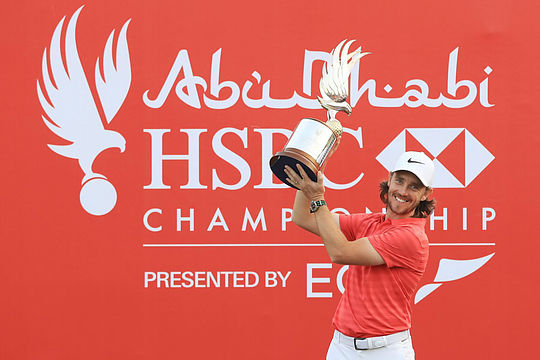 Fellow Englishman Ross Fisher was second at 20-under par while Rory McIlroy finished in a share of third on 18 under after his challenge stalled somewhat on the back nine, alongside another of the English contingent in Matt Fitzpatrick.

When Fisher stormed to the turn in 32, Race to Dubai champion Fleetwood found himself five shots adrift.

Fleetwood, however, rallied with a birdie from 12 feet on the tenth, and when Fisher drove into the desert scrub on the same hole and eventually did well to salvage a bogey it proved to be a crucial momentum swing.

Fleetwood holed a 15 footer on the 12th to make it a three-way tie for second alongside McIlroy and Fisher’s overnight joint-leader Thomas Pieters, although the Belgian’s challenge unravelled on the 11th as he tangled with a bunker and ran up a double bogey.

The Fleetwood charge continued with a gain from eight feet on the 13th, and he then drew level with Fisher by rolling in a 30 footer on the 15th.

A spectacular 40 footer for another birdie on the 16th put Fleetwood in front for the first time since the opening round, and a wayward tee shot on the 15th saw Fisher drop a shot to fall two behind.

Although Fisher got the shot back on the next, Fleetwood maintained the pressure with a birdie from five feet at the last, and Fisher was unable to eagle the 18th to force a play-off.

“I was just saying sort of from the start of the week, I’ve never defended,” said Fleetwood holding his son in his arms.

“I’ve never come to a tournament as defending champion before. It’s a really strange feeling because you feel quite possessive over your trophy and you don’t really want to give it back. So that’s always been in the back of my mind this week.”

“Luckily enough, I was playing well and I had a chance to win, and yeah, the back nine was a very special nine holes. Yeah, it’s it’s a very, very nice feeling coming back.”

Fisher, who was chasing a first European Tour title since landing the Tshwane Open in 2014, began the day level with Pieters on 16 under par and initially seized the initiative when he holed for a spectacular eagle from 50 feet on the second.

However, the birdies dried up just as Fleetwood made his move and a 67 eventually saw the former Ryder Cup star settle for second.

Fitzpatrick followed up Saturday’s brilliant 63 with a 69, while McIlroy struggled for accuracy off the tee during the final round of his first appearance since October and had to settle for a round of 70.

“Overall, I’m really happy how I played this week. My game is in really good shape and I saw some really, really positive signs. So I’m looking forward to next week in Dubai and obviously looking forward to the rest of the season.”

Scott Hend was the best of the Aussies in a tie for 22nd following three consecutive rounds of 69. After opening with rounds of 67 and 68, former Asian Tour player Sam Brazel faded across the weekend to slip into equal 32nd place.

Jason Scrivener was the only other Australian to make the cut in a tie for 48th following a final round 75.