Tommy Fleetwood celebrated his recent engagement and news he is to become a father by moving to the top of the Race to Dubai following his win at the HNA Open de France.

Fleetwood arrived at Le Golf National as one of the in-form players on the European Tour but with a poor record on the course that will host next year’s Ryder Cup having never made the cut or even broken par in Paris. 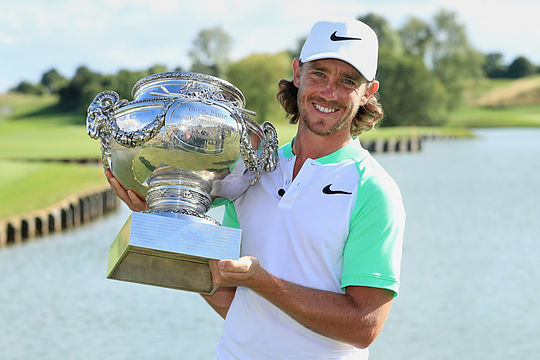 He put that right in some style with a closing bogey-free 66 that gave him a 12 under par total and a one-shot victory over American Peter Uihlein.

“I didn’t miss-strike a shot at all,” Fleetwood said. “I played great today. I felt comfy.”

“It’s always great to test your game and test what you work on every day under the ultimate pressure.”

For Uihlein there was the consolation of earning a spot at the Open Championship along with home favourite Mike Lorenzo-Vera and Swede Alexander Björk, who both finished in a share of third at eight under alongside Dane Thorbjørn Olesen.

The victory is Fleetwood’s second of the season after the HSBC Abu Dhabi Championship and the winner’s cheque of €1,040,824.34 moves him above the season’s only other multiple winner – Sergio Garcia – to the top of the European standings.

Fleetwood also has four other top fives this season including at the WGC – Mexico Championship and US Open Championship and this victory will move him into the top 20 in the Official World Golf Ranking.

The 26-year-old entered the day a shot off the lead but when he put his tee-shot on the par three second within a roll of a hole-in-one, he took a position in top spot that he would not relinquish.

Scott Hend was one of only two Australians to make it through to the weekend. He finished in a tie for 32nd with only a third round 77 keeping him from a top-10 finish.

Jason Scrivener was another shot back in 38th place.

The European Tour now moves to Northern Ireland for the $7,000,000 Irish Open where Rory McIlroy will defend the title he won for the first time last year.