Fleetwood has another chance at glory in Dubai

Fleetwood leapfrogged eight places to No. 2 on the Race to Dubai following his emotional victory last Sunday at the Nedbank Challenge. 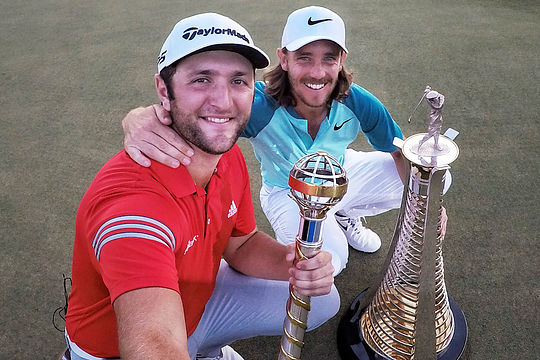 The new World No. 10 produced a stunning Sun City final round that included three eagles in ending a 22-month winless drought in South Africa.

This year marks the 11st staging of the DP World Tour Championship with the golf world remembering those magic scenes in 2017 of Fleetwood waiting in the scorer’s hut at the end of his final round with soon-to-wife, Clare and young son, Frankie before confirmation the Southport golfer had succeeded in winning the Race to Dubai title.

Fleetwood then had the chance last year to retain the Race to Dubai in eventually finishing third to Francesco Molinari and now again the Englishman is in position to end the year at European No. 1.

“I consider myself lucky that I have got — well, actually I have got a lot of experience and this is my third year in a row where I’m one of those players that has a chance to win the Race to Dubai,” he said.

“It’s very special. There’s only a certain number of people that have the Race to Dubai on their resumé. I’m lucky to be one of them and I think it’s one of my greatest achievements and I think I have experienced both sides.”

“Obviously in 2017 when I won, I led it for such a long time. In 2018, I set out and it was never a goal at the start of the year to win the Race to Dubai and all of a sudden just because it was a possibility it became something that really hurt when I didn’t, but realistically, I had not thought about it all year until sort of the last few events that I had a chance.”

“I just think it’s important this year that I take those experiences into it and know that it still takes a lot to do it and it’s not in my hands at all. I can only do my best this week, take one shot at a time.”

“Just going to enjoy this week and do the things that I’ve done so well to get in contention again.”