England’s Tommy Fleetwood held his nerve on Sunday for a one stroke win over the in-form Kiwi Ryan Fox to claim the Nedbank Golf Challenge in South Africa.

Fleetwood closed with a final round 67 to finish at 11-under-par at the Gary Player Country Club to collect his sixth European Tour win and first since 2019.

Fleetwood’s successful defence after winning in 2019, the last time the event was played, moves him up eleven places on the World Rankings and second in the DP World Tour Rankings.

Beginning the final day with a three-shot deficit, the 31-year-old made a hole-out eagle from a bunker, four birdies and a bogey to emulate the likes of Seve Ballesteros, Nick Price and Ernie Els to have gone back-to-back in Sun City. 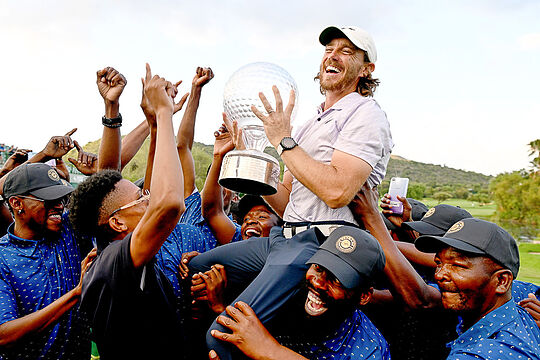 “It’s been a great week. I already had so many amazing memories of this place, such a great connection to it,” said Fleetwood.

“It was such a lovely feeling coming down the back nine with a chance. You draw on the good memories that you have round somewhere you’ve won. I felt good all day.”

A closing bogey meant Fox narrowly missed out on his third DP World Tour title of the season, which would have seen him overtake World No.1 Rory McIlroy at the top of the DP World Rankings.

Still, Fox looks ahead to a showdown with McIlroy in the season-ending DP World Tour Championship in Dubai.

Lee remains the top-ranked Aussie in Europe having moved six places to be currently 34th in the DP World Tour rankings and will be the lone Australian playing the season ender.

Joining Rory McIlroy and US Open Champion Matt Fitzpatrick in the field, Fox and Victor Hovland remain within reach of McIlroy, who has led the DP World Tour Rankings since July, as the four-time major champion bids to win both season-long competitions on the DP World Tour and PGA Tour in the same year for the first time in his career.