It has been well over three years since Tommy Fleetwood was photographed with his ailing dog, Massie in the Scottish Highlands as the 2013 Johnnie Walker Championship winner.

In between that maiden Tour victory the unruly-haired Englishman had some 60 other Tour events with a best of three second-place finishes in 2014. 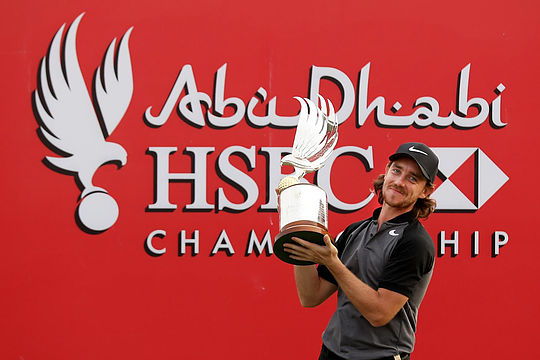 However the newly-turned 26-year-old kept his cool on the back nine to come home in 31 to win by a shot with a 17-under par tally and add his name to the gleaming Falcon trophy as the 2017 Abu Dhabi HSBC champion.

“I had a really hard time from July 2015 to July last year where I really struggled with my game. It’s been an awkward curve,” said Fleetwood.

“The only thing left was ‘let’s get a win’ but, you know, you keep knocking on the door and it will come. I didn’t really think it would be this week. It just shows a lot can happen in golf.”

Fleetwood entered the day a shot behind overnight leader Tyrrell Hatton and turned in 36 on a day of tough scoring and gusting winds at Abu Dhabi Golf Club.

A wonderful chip-in eagle on the tenth then sparked his round to life and three further birdies helped him seal a 17 under total and a one-shot win over US Open champion Dustin Johnson and 2014 winner in Abu Dhabi Pablo Larrazábal.

It was his first win in three years and 150 days for the man who turned 26 on Thursday and has finished in the top 50 in the Race to Dubai Rankings for the past four seasons.

It also continued a fine run of form since last season’s Open Championship, with ten top 20 finishes in his last 14 starts and 42 rounds of par or better in his last 43. Johnson finished with an eagle on the last in a closing 68 with Larrazábal signing for the same score after a rollercoaster of a final round.

Jason Scrivener lead the way for the Aussies finishing in equal 39th with a 75 on Saturday the only blemish on his card this week.

US Amateur champion Curtis Luck got off to a dream start after signing for opening rounds of 72 and 65, however back-to-back rounds of 74 across the weekend saw him finish in a tie for 49th.

Recent Hong Kong Open winner, Sam Brazel, was also eyeing off a solid finish before carding a final round 79 to drop into 60th place with Andrew Dodt another stroke back at 66th and even par.