American Steve Flesch fired a final round 7-under-par 65 for a one shot victory at the Mitsubishi Electric Classic for his second win on the PGA Tour Champions.

Flesch, whose other tour win also came here in 2018, finished at 11-under-par after erasing a four-shot deficit to beat the impressive trio of Fred Couples, Padraig Harrington and David Toms for the title. 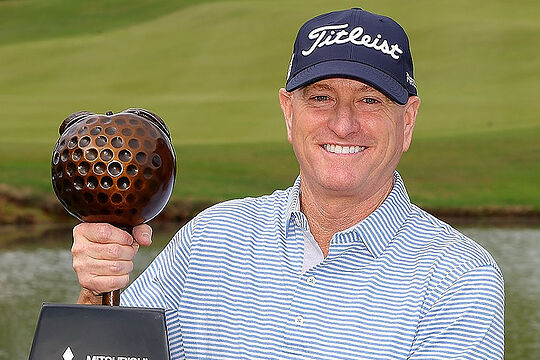 “I just hung in there (Sunday) because I did everything I could to try and make it as hard as possible the first two days,” said Flesch.

“It’s been a trying couple of years. But man, it’s really, really satisfying.”

Toms, the second-round leader, shot a 70 to finish at 10-under. He missed a two-metre putt for birdie on the 18th hole that would have forced a playoff. Padraig Harrington shot 64 and Fred Couples closed with a 66 to join the three-way tie for second place. Harrington, who turned 50 last August, was looking for his first PGA Tour Champions win.

Stephen Leaney rounded out the Aussies finishing in a share of 61st position with Robert Allenby withdrawing after the second hole on Saturday.