New Zealand’s Jayden Ford overcame stern challenges from Jasper Stubbs and Andrew Richards to win the Avondale Medal in a playoff after the trio finished the regulation four rounds at 6-under-par.

Ford made birdies on the second and third holes of the three hole playoff to claim the victory. 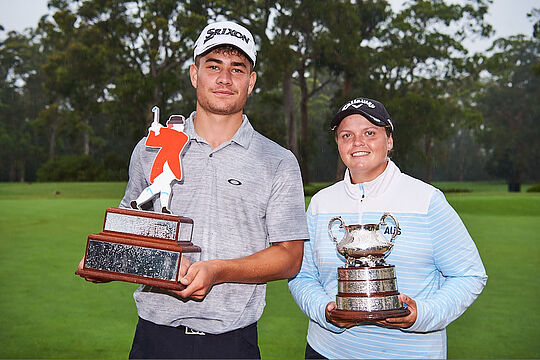 “It was a nice way to finish,” said Ford.

“I hit a couple of nice golf shots and managed to get this win. This is a very big win. I had a solid week down at the Master of the Amateurs in Melbourne and came here with some good prep to play well. Overall, it’s been a great week here at Avondale.”

Ford looked to have the tournament in his hands after a solid drive on the short par 4 17th at Avondale put him in a birdie position which would have given him a one shot lead with one to go. It was not to be with Ford unable to capitalise and missing a 3 metre birdie putt.

“I just shrugged it off missing that birdie and said to myself ‘it’s business as usual going up the 18th,” said Ford.

“I managed to get a good drive and made par to stay in the tournament. That’s the main thing. I was pumped in the playoff and certainly made the shots I needed to get the win.”

Richards also had his opportunities with his birdie putt on the first playoff hole nipping at the cup only to roll by. Stubbs also had a chance on the second to get a birdie but missed. Earlier Ford had hit a majestic 5 iron to the top-tier of the challenging par 3 to be pin high at 2 metres and converted the putt to set the stage for the victory.

An impressive birdie on the tough par 4 18th at Avondale sealed the result for Ford.

In the Avondale Bowl, Western Australia’s rising star Kirsten Rudgeley secured a one stroke victory over Justice Bosio finishing at even par after rounds of 73-71-71-73.

The win adds to an impressive list of local amateur titles which Rudgeley won during 2021 including the Port Phillip Open Amateur, Victorian Amateur, WA Amateur Stroke Play and the Rene Erichsen Salver in South Australia.

Last Tuesday the 20-year-old received an invitation to play in this year’s Augusta National Women’s Amateur which will be staged from March 30 to April 2.

“It’s very special for dad. It’s his dream to go there,” Rudgeley told Golf Australia. “We’re both super excited and I can’t wait to get over there and play it.”

“Playing there is the most prestigious thing the men can do so it’ll be pretty cool because I’m pretty sure we get all the same treatment that they do.”