The Creswick Forest Resort in Creswick, near Ballarat, has won its bid to host the Victorian PGA Championship for the next five years. 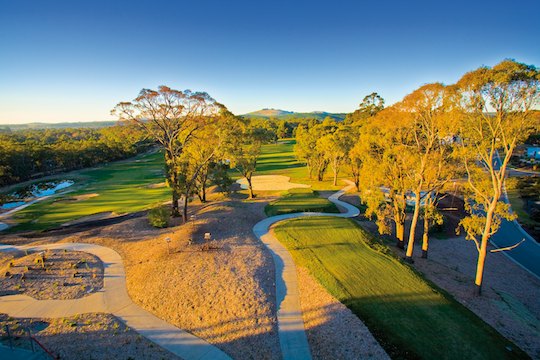 Prizemoney will increase to $160,000 by 2016, which is likely to make it the richest regional golf tournament in Australia.

It will be the first time the event has gone to regional Victoria since Warrnambool Golf Club hosted it in 1986.

The Forest Resort has a large Novotel hotel complex on-site, which the PGA says allowed it to trump other key bidders – the Ballarat and the Traralgon Golf Club.

“There’s nothing like hearing the fizz of the ball off the clubface and that’s the great thing about this event as well is there’s no ropes. People can walk the fairways behind the players, stand near the greens, stand near the tees,” Thornton said.

Creswick’s fairways were soft under foot at the announcement on July 13 and organisers say there is ample time to condition the course.

“I’m sure in February, the greens will be rolling fast, the fairways will have a nice coverage of grass and well see some good scoring,” Thornton said.

“The golf course is showing some great signs of being a tremendous golf course over the journey of the agreement.”

Roberts said “it will be in terrific condition.”

“We had Graeme Scott from the PGA Tour come here during the week and he loved the layout and gave us some great advice. Changing it up for risk-reward for the pros and getting them to go for it a little more. He’d just recently been to the US Open and it was great to get his advice.”

Roberts also said the players will enjoy the change from past Melbourne venues such as Sandhurst, Sanctuary Lakes, Kew and Albert Park Golf Course.

“To have the natural hills and the trees and the undulations on the greens, it will definitely test the pros out for sure,” Roberts said.

The PGA said Ballarat Golf Club made an impressive bid.

“We think (Ballarat) would be a tremendous venue for a PGA Tour event as well and there’s no reason why that can’t happen in the future. The playing surfaces at both venues are very good and would hold up well to a PGA Tour event.”