Forget the flight across “The Pond” to the Big Apple instead it is now all roads to Royal Birkdale for the Dodt’s.

It does mean Andrew Dodt’s wife is going to have to purchase woollens and water-proof attire after her 31-year old husband qualified for this week’s 146th Open Championship. 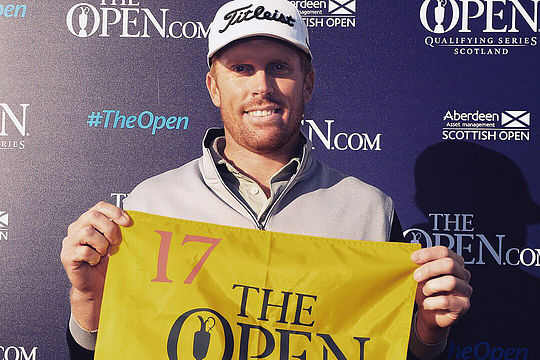 Andrew Dodt has qualified for the 2017 Open Championship (Credit: R&A)

Despite a disappointing Scottish Open final round 73 for a share of fourth place on 8-under, Dodt secured the third and last Royal Birkdale place on offer at Dundonald Links.

The Queenslander denied Londoner Anthony Wall, who is married to an Australian-born former Qantas stewardess, by virtue of a higher World Ranking.

Dodt went into the event ranked No. 193 and Wall is currently 245th in the world.

Rachel Dodt arrived from Sydney and into a rain and windswept Glasgow Airport on Saturday morning but packed for a five-day holiday in summery New York, and a last holiday trip overseas ahead of the couple intending to start a family.

She was the among the first to greet Dodt when he left the Dundonald scorer’s hut.

“Rachel and I were meant to be off to New York tomorrow morning, but pretty happy to be going to Birkdale and my first Major,” he said.

“So, I am over the moon. Over the moon. It’s been a big goal of mine sort of the back end of last year and this year to play my first major, and yeah, next week, bring it on.”

The result is Dodt’s sixth top-10 in 26 Tour events this year and, in some way, makes amends for last May’s disappointment of leading into the final round of the BMW PGA Championship only to finish in a share of sixth on the famed “Burma Road” course.

Encouraging Dodt over the last few holes on the final day at Dundonald was 1995 Scottish Open winner, Wayne “Radar” Riley, who was working on course for SKY Sports.

“I found myself particularly on the back nine, just a little bit mentally fatigued,” said Dodt.

“I felt like I used a lot of energy early on in the round and really had to take things a bit slower and take one step at a time a bit more, because I knew The Open spot was right in line and had to sort of dig as deep as I could down the stretch.”

“I kind of knew I had to hole that. Up the fairway, said birdie would be nice but par should be good.”

“So, it’s great news that I’ve finally done it, play my first major.”

And Dodt’s effort comes just a month after good friend and Adelaide born Wade Ormsby contested his first Major in qualifying for the US Open.

Dodt will now join a big contingent of 11 Australians to compete at Royal Birkdale on the 26th anniversary of when Ian Baker-Finch and Mike Harwood finished one and two in the 1991 Open.