Three years ago Gunn Yang played No.4 for Kingswood in the Division 1 Melbourne Pennant final.

On that wet and windy day at Cranbourne Golf Club in Melbourne’s southern suburbs, Yang easily won his match against Waverley’s Kevin Smith, 5&3. 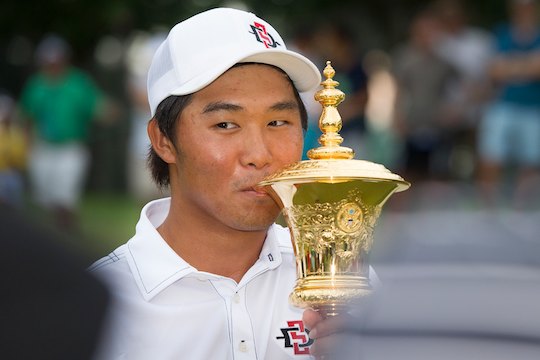 Fast forward three years and this time to the final of the US Amateur Championship, arguably the pinnacle of world amateur tournaments, at the Atlanta Athletic Club’s Highlands course venue of the 2011 PGA Championship, and Yang again pulled off a magnificent victory with a 2&1 win over Canadian Corey Conners.

Yang, now a San Diego State sophomore and making his first appearance at a US Amateur, was able to keep his cool and composure on a day hampered by weather delays to win the tournament of his life.

The afternoon round had been halted by a rain delay of 1 hour, 37 minutes after Yang held a 1-up margin heading into lunch.

Yang was one of the most unlikely champions in the history of the 119-year-old event. Yet no one could tell Yang he was not a deserved winner of this crown.

Yang has played in just four college events, his career sidetracked by a herniated disk that required laser surgery. Just three weeks ago, he withdrew from the California State Open after playing the first nine holes at 6 over.

This was also the second straight US Amateur final featuring two international players.

The 22-year-old Conners, who played at Kent State, reached the semifinals last year and again came up short of becoming the first Canadian winner since 1971.

Yang never trailed in the 36-hole final, pushing his lead to 2-up with four to play by rolling in an 18-foot birdie putt on the 14th. He closed out the match with a tap-in par at the 17th.

“I haven’t won a tournament for a long time, like maybe five or six years,” said Yang.

“I was just trying to go through by every single match, just trying to play my game and trying to see how it goes, and I got the trophy. So I’m really excited and really happy about it.”

Yang gained the momentum on Thursday when he disposed of Georgia Tech’s Ollie Schniederjans, the world’s number one ranked amateur in convincing fashion.

“I thought I would see how I go, maybe I could win this,” said Yang following that match against Schniederjans at the press conference.

Match play is all about confidence and building momentum. Yang achieved that this week in Atlanta. Many simply had not heard of him.

Yang quietly went about his business and was open about his experience playing match play in Australia had given him an edge in this championship.

“Back in Australia, I played a lot of match play in their top division against many of Australia’s best. That certainly helped me this week,” said Yang.

As of the Sunday, the reigning US Amateur champion faced going back to school without a scholarship.

“Better be,” Yang said, chuckling, “or else I’m going to transfer.”