Peter Wilson has returned to the Kalgoorlie Golf Course for the first time since he won on the layout in 2012.

The TX Civil & Logistics WA PGA Championship was Wilson’s last victory on the ISPS HANDA PGA Tour of Australasia – one he was unable to defend. 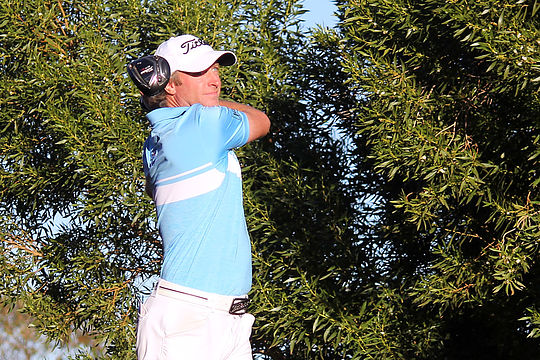 While overseas playing commitments may have kept him from Kalgoorlie until now, he has made a triumphant return.

Wilson fired an opening round of 8-under 64 to lead the TX Civil & Logistics WA PGA Championship by two shots.

“Last time I was here I actually won the tournament, so I have good vibes here. It’s nice to be back,” said Wilson.

“It’s an amazing golf course; the grass condition we have in the desert is amazing.

“I only missed one green and holed every putt except one, so I hit it and putted it well. I generally hit it pretty straight and the greens here are like the ones I putt on at home.”

He has come into the week in excellent form having picked up a number of wins recently on the Ladbrokes PGA Pro-Am Series.

“I have been playing well this year. I won a few pro-ams in Melbourne so it’s nice to be putting it into a Tour tournament,” added Wilson.

Sitting two shots off the pace is Max McCardle who has been a frequent visitor to the desert layout.

“I played pretty well and controlled my ball well. Really my only blemish was on the third but that settled me down and stopped me from over attacking the pins,” said McCardle.

“I have played out here a couple of times and finished in the top-10. I feel comfortable out here and can see my shots pretty well.”

A further shot back and tied third are West Australian Stephen Leaney and Queenslander Jack Munro.

Setting the early pace in his title defence was Stephen Dartnall who fired a bogey free 4-under 68 to lead after the morning field alongside Michael Long (NZ), Leigh McKechnie (NSW) and Taylor Macdonald (QLD), while playing in the afternoon field Rory Bourke (VIC) joined them on the number.