Gunn Yang sharpened his teeth back in Australia on the art of match play playing Division 1 Melbourne Metropolitan pennants for Kingswood four years ago.

And during his match in the round of 16 at the US Amateur against Ollie Schniederjans, the top-ranked world amateur, it showed. 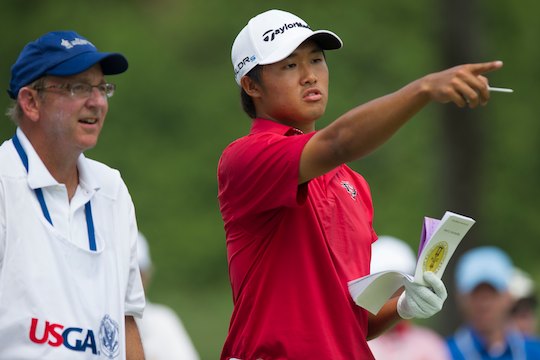 Gunn Yang checks his yardages on the 9th during the round of 16 at the US Amateur being played at Atlanta Athletic Club (Credit: Anthony Powter)

Yang, now a San Diego State sophomore and making his first appearance at a US Amateur, showed no sign of first time nerves against the world number one in a match which saw both players sharing the lead in a contest which easily was the best to date here in Atlanta.

Down a hole at the 15th against Schniederjans, a senior at Georgia Tech, Yang looked out of it.

He then managed to make things interesting with a string of birdies on 16 and 17 before notching his biggest win to date against the tournament favourite.

“This match was maybe the best match I’ve ever played so far,” said Yang.

“On the 9th hole, actually, 7, 8 and 9, those holes I won . And I made like a 30-footer birdie on the seventh hole and Ollie missed his 20-footer for birdie. These were a turning point I feel in the match.”

The art of match play is closing out on your opponent and today Yang executed the perfect stage of a close out against a classy opponent who was being supported by the strong local crowd.

Birdies on 16 and 17 on Atlanta’s Highlands course, one of the most brutal and toughest stretch of incoming holes in golf, would prove a weight in gold for Yang. Clearly it is where the match turned and the aggressive style of play paid off for Yang.

“I don’t like really the passive way of playing golf,” said Yang at the post-match press conference.

“I’m kind of an aggressive player. I did what I wanted to do and it showed up. This match was maybe the best match I’ve ever played so far.”

Yang didn’t even have status in these championships and needed to qualify through being a medallist at pre-qualification with his world ranking coming into this US Amateur in the high 700′s.

What a difference a week has been and claiming the scalp of the world’s number one is a huge feather in Yang’s cap.

“I’m like, wow, this is how the No. 1 player in the amateur golf plays. But what I normally do is whenever someone puts the ball next to the hole or has like lots of birdie chances, that kind of motivates me, so I can also leave myself an opportunity to make birdies more.”