Former PGA Tour player Byeong Hun An has taken out the LECOM Suncoast Classic on the Korn Ferry Tour finishing with a one stroke win over a string of four players including fellow South Korean player Seonghyeon Kim.

Byeong Hun An finished at 17-under-par for his first win in seven years. An carded a final-round 69 which included a bogey on the final hole at Lakewood National GC Commander in Lakewood Ranch, Florida. 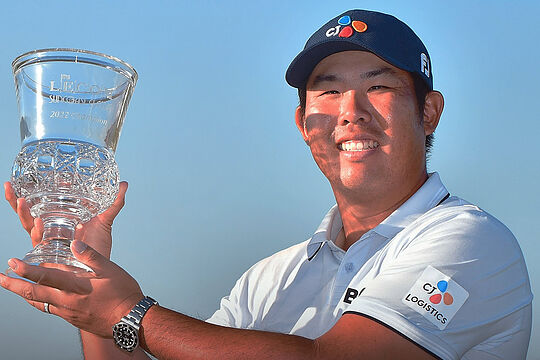 “It was a long day,” said An. “I was grinding all day. Last hole was a bit unlucky, lucky and unlucky at the same time, but I got the job done and that’s what you need to do. I missed a lot of putts today, but grinded it out and just did enough to win out there.”

“I finally realised I don’t need to play four days of perfect golf. I had a mediocre day yesterday and today and still got away with this. It gives me a lot of confidence.”

While it was An’s first PGA Tour sanctioned victory, he previously won the 2014 Rolex Trophy on the Challenge Tour, 2015 BMW PGA Championship on the DP World Tour, and 2015 Shinhan Donghae Open on the Korean Tour.

An played six consecutive seasons on the PGA Tour which included three runner-up finishes at the 2015 Zurich Classic of New Orleans, 2017 Memorial Tournament and 2017 Canadian Open.

As a result of Sunday’s victory, he climbs from 84th to 5th on the Korn Ferry Tour Regular Season Points List.

Brett Drewitt finished the best of the Australians in a share of 46th position, with Curtis Luck in a share of 55th and Aaron Baddeley rounding out the Aussie contingent to make the weekend finishing in 68th position.

The Korn Ferry Tour takes a month off before returning with back-to-back events in Louisiana at the Chitimacha Louisiana Open in Broussard and the Lake Charles Championship.