Donald’s name had been seriously in the Rome captaincy mix late last year when GolfByTourMiss was talking exclusively during the course of the Hero World Challenge with potential replacements for Irishman Padraig Harrington. 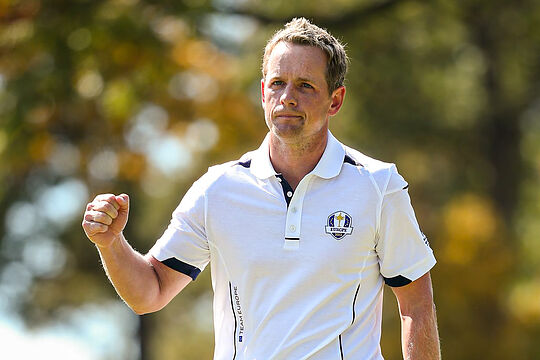 The US-based Donald has the distinction of playing in four straight victorious European Teams (2004, 2006, 2010 and 2012) while he acted as a vice-captain under Thomas Bjorn in the 2018 ‘Victory in Versailles’ winning side and then last year acted as a deputy under Harrington’s captaincy.

Now aged 44, the former World No.1 would also seem to be the ideal replacement to Stenson with as many as four future European captains – Lee Westwood, Ian Poulter, Sergio Garcia and Ireland’s own Graeme McDowell, who had hoped to be appointed for the 2027 European Team captain in 2027 on home soil at Adare Manor – each ruling themselves out in joining LIV Golf.

Donald’s only real Rome captaincy opposition would seem to be fellow Englisman Justin Rose, but at age 41, Rose can surely be pencilled-in as a future European Team captain.

Though he will only have 14 months to prepare, Donald would be a wise choice as opposed to asking the likes of Harrington to return to the role he held last September in Wisconsin.

It is also understood Donald will, at the request of the five-man European Ryder Cup Committee, be asked to retain Eduardo Molinari and Bjorn as vice-captains, the pair chosen by Stenson at the end of May.

Donald was quizzed about taking over the Rome captaincy following his opening round of a two-under-par 70 on day one of the PGA Tour’s Rocket Mortgage Classic in Detroit.

“There’s nothing official to report,” Donald said to reporters. “I have been in talks with Guy (Guy Kinnings, the Ryder Cup director) at the European Tour. And that’s all I know right now. I know I have a very good chance, Thomas Bjorn and a couple other guys are under consideration.”

“If I got this captaincy I would live up to my word and see it through. Let me put it that way. I wouldn’t be doing a Henrik!”